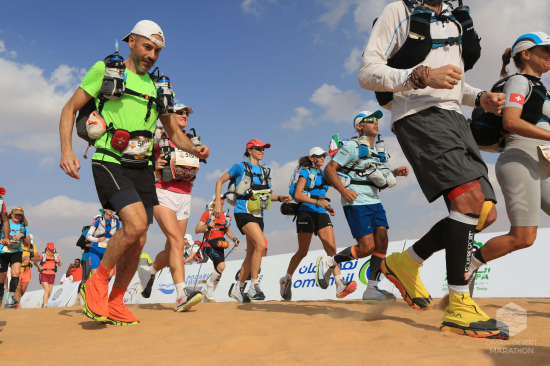 Yesterday runners spent almost all day resting, preparing for the longest stage of the race, 42.3 kilometers and 1450 meters of ascent with 1550 meters of descent, too. To many runners, this appeared as the most difficult stage of the race. Usually, If runners have made it till this point, they can make it to the end.

Said Khatem Al Hajri, a 26-year-old runner from al Hawya, Bediya had never been in the desert before, although he is a local. The first and second day of the race he was the last of 55 participants to arrive at the finish line, but on the third and fourth day, he finished on the 18th position.

Imad Barakat, a 58-year-old Syrian athlete, who is participating in the Oman Desert Marathon for the 5th time. He likes Oman very much and keeps coming as he feels at home with the Omani hospitality.
The general feeling at the runner's camp was positive, runners were happy, resting and chatting. When the conditions are good, everything is fine. The referees were also resting as a long night awaited them. The podiatrists were taking good care of all athletes with blisters problems, and they expected to see at least 25 of them before that stage 5 started.

At the 7th kilometer of the race, runner Chiara Zenari had to be assisted by the volunteers at the checkpoint. An ambulance arrived quickly to the location and she was given a pain killer as she could not walk because of severe pain in her oblique tendons. Unfortunately, she had to be pulled out of the race. She was very disappointed but in good spirits, after a while.

Davide Vitali has also withdrawn from the fifth stage as he complained of severe abdominal pain. Runner Imad Barakat, from Syria, dropped out of the race and arrived to camp at 1:00 AM and he seemed to have problem walking. All runners felt tired and beaten down emotionally & physically on arrival.

The first arrivals at the finish line after 42.3 kilometers of sand running were Mohammed Almurabity from Morocco, followed by his brother Rachid Almurabity and Evgeni Glyva from Ukraine, in third.

In women's category, Aziza Raji was in first place, followed by Fabiana Pizzali and Emmanuelle Romazi from Italy and France, respectively.

Oman Desert Marathon 2019 - Day 6
With the briefing taking place at the start line at 6:30 AM, runners were very tired and nervous. It was a long night before making it to

Oman Desert Marathon 2019 - Day 4
The fourth stage began very differently from yesterday, as it was a sunny and very humid morning. The sand was almost wet and very easy to