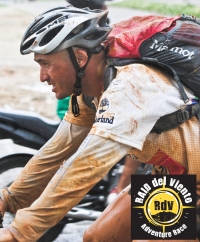 Expedition adventure races are a unique sporting endeavour.  They are a mix of adventure lifestyle and multi-sport overload, a combination of travel and adventure, and a step away from the modern world and its many constraints.

To organise such an undertaking an expedition race needs a strong leader, to make it all happen despite the endless logistical challenges, but more importantly for the teams to place their trust in.

Raid Del Viento in Argentina was launched earlier this year as an AR World Series Demonstration Race and before the first registration deadline the race roster was full!  It is a remarkable achievement for a new race.

That is largely down to the teams putting their faith in Race Director Daniel Pincu who talks to SleepMonsters Editor Rob Howard of his plans for the race, and his own adventure racing history and beliefs.

How did you become involved in Adventure Racing and what does it mean to you?

Since I was a child I’ve felt in touch with nature and I was born in the region in which we are now planning Raid Del Viento.  This race is an expression of my love for my homeland and the mountains, and I want to share them with others from around the world.

My sporting life began when I tried mountain running in my teens and when I was inspired by watching Raid Gauloises and Eco Challenge I discovered my passion for adventure racing. It was the perfect way to experience the landscape and since then I’ve followed this activity as my way of life.

Through adventure racing I’ve met great friends and I’ve had the opportunity to see and discover many cultures, very different from mine.  It’s more a lifestyle than a sport and I can’t imagine my life doing another activity.

What races have you taken part in, and which are your most memorable experiences?

I have raced aver the five continents and had so many unforgettable moments, too many to recall.

The legendary Patagonian Expedition Race and Desafío de los Volcanoes were among the first adventure races I took part in and I’ve raced almost 200 adventure races of different kinds.

From the ARWS I have competed in close to 30 races, but now, in my mature age my ambitions are different.  During the first 15 years of racing my main motivation was just to be able to afford to race. Back then the equipment we used was very different and we raced close to the edge!

I admired and followed many great racers like Guri Aznarez, Daniel Serenelli, Antonio de la Rosa, Carlos Curipan and Ruben Mandure.  I learned a lot from them and my motivation changed a little as I embraced the challenge of navigation and became more motivated to choose the route.  You can be sure navigation will be an important part of Raid Del Viento.

How did you become involved in race organisation?

I started organising trail races four years ago but always dreamed of staging my own raid in my home land.  I want to show the raiders my own world of adventure and also to show my lifestyle to my own people.  My partner in delivering the race is Miriam Vicente.

Why does the race have its name?

The name Raid del Viento is from the name of the mountains in the race location. They are called the "Cordillera del Viento", and are  very close to the Cordillera de los Andes. The mountains and life here are shaped by the wind, so ‘Raid of the Winds’ sounded right to me.

What are your hopes and expectations for Raid Del Viento and what can the teams expect?

Five months before race day we have all the entries filled.  It is a great responsibility and we are working hard to deliver something unforgettable for the teams.

We want to show this part of Patagonia to the world and in the long term hope one day to be the organizers of a World Championship race.

First of all, our organization has the priority of welcoming the teams and providing an epic experience for them.  For us nothing is more important than the teams leaving Patagonia with a very good impression of our organization, and the race itself.

We can’t say too much of course, but technically the teams will experience a whole mountain race ... it will take place 100% in the mountains!

Our race philosophy is also to have a dynamic race, where there will be many stages and they will be very technical. Navigation will have an important role to play as well.

We will welcome the teams and test them to their limits in the mountains of Patagonia, and when they leave we hope they will already have in their hearts a desire to return.