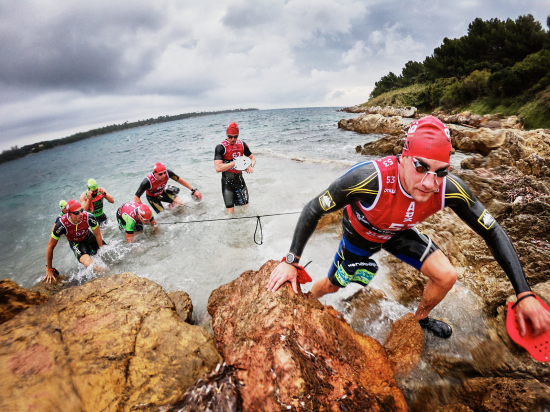 The sixth ÖTILLÖ Swimrun World Series race of the season was a very windy affair. The wind and waves forced the organisation to change the course into to a fast and challenging course with some big swims that took its toll!

The women’s category had a new scenario with Team ARK Swimrun - Helena Sivertsson & Ulrika Eriksson (SWE) leading the way from the beginning to the end in front of the current World Champions - Fanny Kuhn & Desirée Andersson, Team Envol (SWE). An impressive win! The time difference was just over 3 minutes after 4 1/2 hours of racing and 9th overall!

In mixed the young French team - Matthieu Poullain & Eugenie Plane, Team ARK Swimrun (FRA) showed why they have a bright future ahead. They took the lead early on and kept it all the way taking a comfortable win with over 7 minutes. They finished 8th overall!

ÖTILLÖ Cannes 2019 has been the race weekend with the most participants this year (638 in total) and with racers from a total of 31 nations.

The Race In Detail

“After about mid-race we decided to push and make a break which we managed to hold until the end. Today the swims were fun and very challenging. It must have been tough for those not used to conditions like these!” said the thrilled winners Alexander Flores & Fredrik Axegård, Team ARK Swimrun (SWE) after finishing as overall winners in 3:55:37.

The course started in the medieval fort on the Sainte Marguerite Island and then took the racers to the monastery island of Saint Honorat before returning to Sainte Marguerite. This section was done twice before swimming a big swim with big waves and currents to the mainland. There the course took the racers up the brutal train track to the top of La Californie before finishing down in town again. This race became a big nature experience with not much of the course in town.

The water temperatures were around 20 degress and the weather gods shared lots of wind on race day.

Several teams had to struggle to make it in time for the two cut offs. Some had to abandon along the way. The top teams pushed each other hard, chasing each other in a tight group in the first two hours before the pace took its toll. The level of competition this year has really gone up to the next level!

At all ÖTILLÖ swimrun World Series events teams race in pairs, using each other’s strengths to push boundaries. The team experience is incomparable and is part of why swimrun is growing so fast in popularity.

151 teams of two from 24 different nations travelled to Cannes to compete in ÖTILLÖ World Series Cannes, the second qualifier for ÖTILLÖ, The Swimrun World Championship 2020 in the Swedish archipelago.

The day prior to the race two shorter, more accessible races were organised, the ÖTILLÖ Sprint and ÖTILLÖ Experience, offering the same flavours as the longer, more challenging race but in a smaller format.

You can see the complete results list here: https://otilloswimrun.com/races/cannes/results-2019/