British racer Maria Leijerstam recently set herself the challenge to travel the length of Wales, taking in the ten highest peaks in the country. In total she ran 100km, kayaked 20km and biked 280km.  Here's her account.

It was 10:30 and I’d been climbing alone up the 7th highest mountain in Wales standing at 905m, Aran Fawdrrwy. The wind was blustery and I had passed no one on the mountain. The tracks on the map were virtually non-existent but half way up I managed to hook onto a fence handrail that allowed me to comfortably continue my climb up.  As I hit the 870m contour line the visibility suddenly dropped to about two metres and I detoured away from the fence in order to head for the summit. The hood of my jacket flapped ferociously next to my ears and I began to stumble around trying to keep my sense of direction. I was glued to my compass holding it close into my chest.

My epic north to south Wales self-planned Run, Bike, and Kayak Adventure Race had begun the day before at 4am when I dipped my toe in the water at Conwy.

The journey out of Conwy didn’t begin well. I managed to get lost on a golf course in the dark, skid on a pipe and face plant off my bike and lose one of my hand grips all within the first 25 minutes! 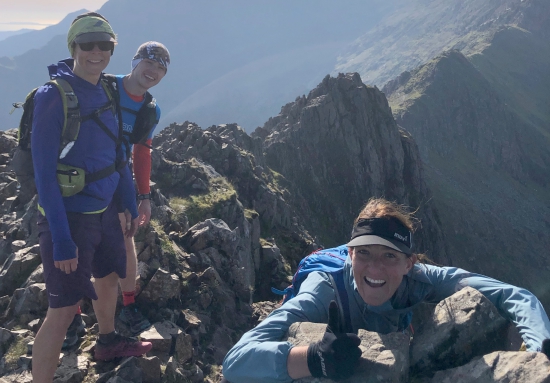 Progress improved as I ticked off the Welsh 3000’s (plus a few more) with elite mountain runners Chris, Connor and Fi and I continued by cycling through the night to southern Snowdonia. During the cycle I felt very sick. With an aching stomach and uncontrolled retching I fell into the hedge still attached to my bike only to vomit everywhere. With vomit came wee - so I wasn’t in a great state.

Fi, who was with me for the first 24 hours was superb and helped me regain my focus to continue on.

At 3.30am we rolled into the transition where Hylton, Michelle and Liam were eagerly waiting to assess our predicament and support us the best they could. My little Antarctica red tent was sitting waiting with sleeping bags and pillows — wonderful. A box of fish and chips lay waiting to be eaten. Perfect. I slept happily for a few short hours and at 7am I set off alone up Aran Fawddwy.

This time with slight disorientation I set off thinking I was somewhere else. I spent twenty minutes searching for the access path to the mountain. This was followed by three hours of scrambling through knee high bracken and soft boggy grass tufts. My legs felt drained. I stared at my compass. The fence I’d been following had disappeared. I scrambled over rocks constantly thinking this must be the summit but as I edged ever forward, the altitude continued. False summit after false summit. 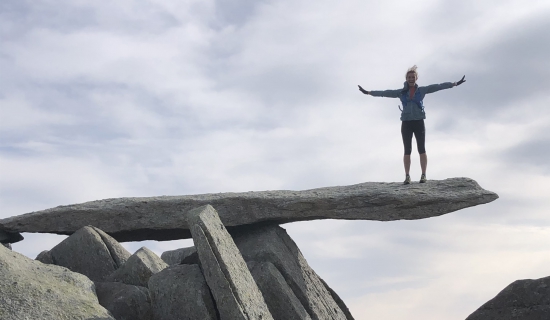 The wind was howling and I sat down behind a large crag to try and regain my focus. It really was time for me to turn around and go down but now I didn’t even know which was the right way down. After a short while I stood up to try and gain some strength and as I turned to face back uphill a man appeared with his dog about two metres away from me. “Where is the summit” I asked desperately.

“Keep the wind on your right cheek and you’ll hit it”. Before I could respond, he was gone.

Was that my guardian angel or was he a figment of my imagination? All I know is that from that moment I tucked away my map and compass and walked on ensuring the wind was hitting my right cheek. After 20 minutes I scrambled straight onto the summit.

With a journey like this you need a few highs to combat the lows and some hours later, I climbed Cadair Idris with ease.

The excitement began at 6am the next morning in a kayak with my mother on the River Wye. The banks were just discernible as we peered into the darkness, trying to avoid the looming rocky shapes that appeared in our path. Moments of stillness were broken by the water steering its way angrily over the stony riverbed at times throwing the kayak dangerously from side to side. I hadn’t warned my mother about the rapids. Instead I calmly described the emergency procedure if we went overboard. “Ensure you float on your back, legs first, to protect the rest of your body,” I shouted over the sound of cascading water. Fortunately, we didn’t need to test it.

After two and a half hours we decided to climb ashore to avoid the well-known ‘Hell Hole’ Rapid. 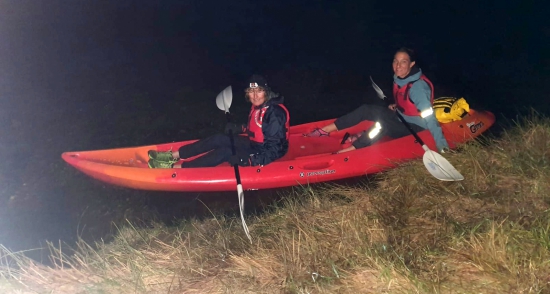 I  had a 2.5hr bike through some lovely countryside around Builth Wells leading to Brecon then a quick dash up Pen-y-Fan only to be greeted by a  about 40 people waiting to have their picture taken at the summit.

I spluttered a few apologies as I leapt in-between two groups and placed my hand on the trig point before managing to muster up a little more speed on the descent in spite of screaming thighs. The end was in sight.

Then I was on to both the worst and best leg of all. It was the final leg and I was about to be joined by my three and five year old daughters for the final few kilometres into the bay. The Taff Trail isn’t the most pleasant riding so I just kept my head down and pumped my legs as hard as I could. Fortunately, I’d received permission to cycle through Rhondda Cynon Taff from Public Health Wales, just as it went into a local lockdown.

As I approached Cardiff barrage on the Penarth side I saw Wayne my husband urging the girls to get ready. They were all wearing their Mini Burn t-shirts in different colours.

I hugged them all briefly but the girls were very eager to get going. We only had two kilometres to ride but it took us about 20 minutes because we had to stop for a few melt downs, itchy bottoms, and arguments over who should go first, itchy head and a disagreement over what side of the road one should cycle on!

After an epic 61 hours north to south Wales journey, I was instantly transported back to the reality of being a Mummy!