The Athlete Line-up For The 2021 Edition Of The Unrivalled Red Bull X-Alps Race Is Announced!

The 10th edition of Red Bull X-Alps is set to kick off on June 20, 2021. The return of the world’s toughest adventure race will see 33 athletes from around the globe arriving in Austria, competing to hike and fly their way to the finish line.

Starting in Salzburg, the competitors will put their body and mind to the ultimate test, navigating their way over 1,000km through treacherous alpine terrain. Often covering 100km a day, only by foot or paraglider, the athletes must combine skill and strategy, pushing through pain, injuries and fatigue to reach each turnpoint and avoid elimination.

The journey itself is an epic story, but the most important part of the entire race is the group of athletes putting their abilities to the test to compete in Red Bull X-Alps 2021. The 10th edition will see 33 world-class athletes from 17 nations pushing themselves to the limit, in an effort to beat not only personal, but also world records; 14 of whom are rookies and 3 are female. The athletes won’t be all alone though, as each athlete is assisted on the ground by a dedicated supporter, ensuring they get the strategic, medical and nutritional help needed in a race like this.

The line-up for Red Bull X-Alps 2021 is one of the strongest yet. With returning veterans and rookies alike, we have no doubt that this selection includes the world’s toughest adventure athletes ever!

They come from far and wide, including countries like Brazil, Japan and Russia. Race director Christoph Weber says, "We always try to have an international field of athletes. We are not just filling up the race with European teams. Rather, we want to give the whole world a chance to take part in this race." 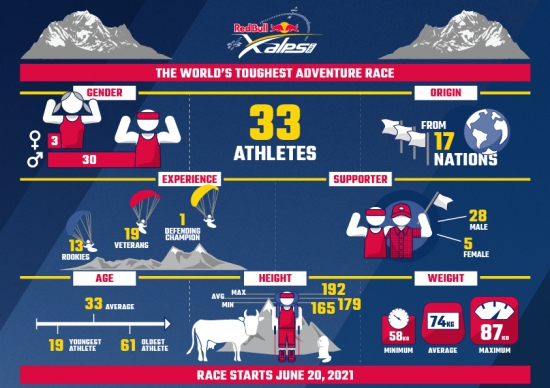 Following careful consideration, it is with great excitement that the moment has finally arrived to announce who will be taking part in Red Bull X-Alps 2021. The line-up is as follows:

You’re probably wondering how we make the call. For example, is there a set ratio between rookies and veterans? Race director Christoph Weber explains, "We always have around 30-40% of rookies. The number increases by itself because as many older athletes choose to stop racing, lots of younger athletes are entering who look promising and strong. It makes sense to give them a chance.“

Physically and mentally, nothing comes close to the challenges of Red Bull X-Alps; and when you consider the ever-changing weather conditions, thousands of vertical meters and a distance of over 1,000km; there’s truly no telling what will happen. Does someone have what it takes to stop Chrigel Maurer from taking a 7th victory? Will one of the rookies surprise us or will we see one of the French athletes take the lead?