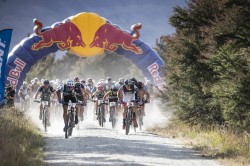 The dates are set and entries open for one of New Zealand’s most challenging endurance events with a brand new race hub in Wanaka.

Red Bull Defiance returns to Wanaka, New Zealand on the 19th and 20th January 2019 marking the fifth edition of one of the world’s most challenging endurance events.

The gutsy two-day adventure race is the creation of Red Bull athlete and New Zealand Ironman champion Braden Currie and attracts leading multisport athletes from around the world.

“There isn’t anything quite like this on the multisport calendar which makes it enormously popular. The combination of kayaking, mountain biking and trail running over two days through Wanaka’s mountains and high country stations is a compelling combination for athletes.”

“It’s always a ‘sell out’ with only 85 team spots available and last year we had competitors from all over including Australia, the UK, USA and Europe.”

Edgewater Wanaka, located on the foreshore of Lake Wanaka, has been announced as the new Red Bull Defiance race hub for 2019. The high-end resort will host all pre and post race activities including competitor registration, gear check, start and finish lines.

Edgewater Events Manager Ellita Thomas says the multisport event is a boost for the resort.

“We are so excited to be part of Red Bull Defiance next year. It is such an amazing sporting event, and Edgewater hopes to complement the event nicely," says Ellita.

“Located right on the lakefront and just off the Millennium Track, athletes and spectators can relax on Edgewater’s rolling lawns, celebrate with a drink from the bar and grab something to eat while soaking up the atmosphere and views.”

Red Bull Defiance will be hotly contested in January 2019 with entries open from today. Race Director Bex Law says Super Early Bird prices for the month of May are a reward to early entrants.

“We encourage competitors to get entries in early, claim a team racing spot and start their training regime in the lead up to the event.”

Young Guns Fight Back to Win Red Bull Defiance 2019
With unbeaten champion Braden Currie supporting from the sideline this year, the field was wide open in the elite category. And it was

Tumbles and Triumphs on Day One
Richie McCaw’s teammate and multisport veteran Bob McLachlan takes a tumble on the technical stage one mountain bike, as accomplished