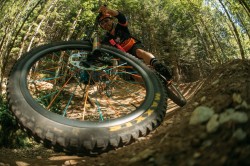 Morning temps for the burly 56 km final stage of BC Bike Race in Squamish were expected to be in the mid 20s soaring to the low 30s in the afternoon. Some of BCBR's 90 Mexican participants might consider it a chilly spring day. On the coast we call it hot. Perennially a people's choice favorite, the Squamish course was about to serve up a veritable smorgasbord of sumptuous singletrack.

After a 5km warm up on asphalt to wake legs fatigued from six days in the saddle, tires hit dirt on Lumberjack, a swift XC beauty that traverses over to the dense Alice Lake zone. Once again overnight dew made the morning dirt super tacky. After Lumberjack, racers settled into ascending mode on the perfectly graded 50 Shades of Grey, followed by the techy, power move and rock slab playground.

"I came here for two reasons, to have fun and to finish it,"  said Texan James Childre, as he granny geared up 50 Shades of Grey in a line of racers as long as a coal train.

Meanwhile among the leaders, a battle royale was underway. The always analytical Jeremiah Bishop was hoping once again to leverage his climbing strength to gain time on the faster descenders. But finding weaknesses in Geoff Kabush's game is like  finding fault in a saint; the defending BCBR champ and yellow jersey holder shreds as fast down as he pedals up and has the technical chops of someone who grew up riding West Coast singletrack. And Francois Bailly-Maitre - his normal focus is the Enduro World Series not XC marathons. It turns out he has some ponies under the hood as well.

The course featured multiple ascents totaling nearly 1700 metres in vertical gain; a grand tour of Squamish singletrack that set the stage for plenty of seesawing at the front end. It was exciting right to the grueling end with the indomitable Kabush rolling across the finish line at Brennan Park Recreation Centre in a time of 2:35:38, one second in front of Bailly-Maitre with Bishop on his back tire in third place.

Kabush set the tone early in the week, taking both the Cowichan Valley and Cumberland stages, and after today's Squamish stage successfully defended his overall win in a crushing 7-day cumulative time of 15:18:22. Bailly-Maitre surprised himself, taking second place, followed by American Kona rider Kerry Warner.

"I didn't know what to expect when I came here. Obviously my strengths are in the downhill sections so I'm very happy," said Bailly-Maitre after the award ceremonies.

In open women there were no surprises with Czech-American phenom Katrina Nash claiming the top podium, with youthful challengers Kaysee Armstrong and Hannah Finchamp in second and third position.

"I had a great day. I rode with Dre [Hestler] for awhile and that was super fun," said Armstrong

If there was a prize for smiles, then teammates in Open Women, Soraya Senao and Beatriz Gallego, would be gold medalists. All week these two exuberant first time BCBR participants looked like they were hitting personal peak moments.

"It's been the most beautiful week, the singletrack, the people, the scenery. It's one of the best life experiences," Senao said, searching for the words to describe her BCBR week. "And our technical riding skills have improved so much."

For these two, a return to BCBR is a slam dunk. The pair took 2nd place overall in their category and their exposure to BC singletrack has changed their perspective on what makes mountain biking so awesome.

For other 2018 BC Bike Racers, this was their first ever bike race - full stop. Talk about picking off an epic for a baptism in singletrack shredding. When the BCBR media team checked in with Rolly Molina back at registration a week ago in North Vancouver, he was nervous, unsure whether or not he'd be physically or mentally able to complete 7 back-to-back mountain bike marathons. When Molina pedaled across the finish line at Brennan Park, the look of elation on his face could have lit up a cave.

"You know when you stay up all night when your wife is in labour, then finally the baby comes. Well that's how I feel right now," Molina said, sporting a giant grin.

When you spend 6.5 hours in the saddle and on the trail, you have plenty of time to ponder the sense of personal achievement upon completing a seven day stage race, that six months ago when Molina was still smoking a pack week seemed like a pipe dream. In Molina's case, it's a mix of overwhelming relief and pride - even life changing.

As the last racers rolled into Brennan Park in the afternoon, the beer gardens were pumping tunes, the beers were flowing, and BC Bike Racers were swapping tales from an epic week on the trails.

Even pros like Karl Platt, who took the Powell River stage and was in the top-10 mix all week, says the BCBR vibe is special. "I might have had a few too many beers but I enjoyed every single minute of the week," Platt said.