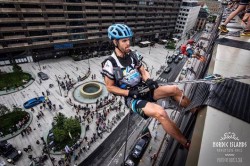 The Nordic Islands Adventure Race 2018 is now underway and in the spirit of the Vikings teams set forth from Stockholm, Sweden on an epic 600+km journey taking them through the Åland archipelago to Finland.  Watch the teams live at http://live.arworldseries.com/niar18/

The race began with a spectacular abseil off the race HQ hotel – Downtown Camper by Scandic.  23 separate ropes were draped down the building and each team was allocated one rope – descending one team member after the other.  If any of the athletes were nervous it was difficult to see in the hype and excitement of the start.

The abseil was followed by a short 6.5km orienteering through the old town of Stockholm.  There was a twist for this leg – teams were provided a 16th century map to navigate from.  Most teams managed to orientate the historic map with present day features and it was only the Mexico team Teenek Racing who made significant errors.

Racing remained extremely close amongst the top teams as they transitioned to a 16km Pack Raft leg through many channels and around or over islands and finishing in Alta.  After three and a half hours of racing, as they checked into the transition area, the top 7 teams were within 6 minutes of each other and ahead of the chasing pack by 10 minutes.  They were in order of arrival Estonian ACE Adventure (EST), Swedish Armed Forces Adventure Team (SWE), Greener Adventure Team (SWE), Sweco Adventure (SWE), multisport.fi (FIN), Haglofs Silva (SWE) and Hamilton Adventure team (SWE).

Teams are now beginning the longest mountain bike leg of the race, a monster 230km North to Singo.  Winning team is estimated to take over 4 days to finish and the course is open for 6 days.

The Twilight Zone
Aside from the elite teams, or maybe they hide it better, the twilight zone is that period of the race where most expedition racers are at

High Seas Thwart Ocean Crossing
The sun rose on day 2 of the Nordic Islands Adventure Race to blue skies and light winds. With a good forecast for the rest of