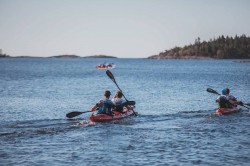 The sun rose on day 2 of the Nordic Islands Adventure Race to blue skies and light winds. With a good forecast for the rest of the day, the top five teams set forth to cross the Baltic Sea from Singö in Sweden to Eckrö in Åland. At around 10am as these teams approached the one third point of the 60km paddle the rising wind and seas began to cause significant concerns for the safety staff. Teams preparing to set off were held at the transition area at Singö while the situation was assessed further and shortly after the decision was made to cancel the leg and return all paddlers to shore.

Captain of Swedish Armed Forces Adventure Team Johan Hasselmark said “We were the first team at that point and of course we didn’t want to quit. It was pretty rough conditions with two metre waves, we had a couple of interesting moments before we got pulled out of the water.“ Sam Clark Multisport from New Zealand was a last minute addition to the team and said “It was the right call, I wouldn’t go out in that if I was back at home”.

The announcement was made public on the NIAR Facebook page and Michiel Prins commented “Safety should always be priority number one. Yet, I can't help but think of true vikings crossing these seas a thousand years ago, in a wooden boat made by their own hands and a sail made by tying their underwear together”.

Race Director Staffan Björklund described in the pre-race briefing that the Leg 6 sea kayak was an ambitious challenge for teams and there was a risk of cancellation due to weather. In this case the back up plan was for teams to take one of three Eckrö Linjen ferries to Åland through the day.

The lead group of 17 teams caught the 3pm ferry, arriving in Åland around 6pm and there was a mass restart at 7:05pm. To keep the race as fair as possible teams will have a time adjustment added to their finish time to account for the time they were behind the lead team as they arrived into TA3 at Singö.

The remaining teams continue to cycle North along the final sections of the 230km Leg 4 mountain bike. They must ensure they arrive to catch the final ferry of the day departing at 8pm.

After the restart and into the second night of racing teams begin Leg 7 which is an 84km SwimRun estimated to take between 11 and 18 hours. This discipline as part of the AR World Series is unique to the Nordic Islands Adventure Race and well suited to the extensive archipelagos of the region. This route travels across Åland which has over 6000 islands. Teams navigate and run across islands and swim to the next. The longest swim section between islands is 500m and the shortest is just 50m.

The Twilight Zone
Aside from the elite teams, or maybe they hide it better, the twilight zone is that period of the race where most expedition racers are at

The Vikings Set Forth – NIAR 2018
The Nordic Islands Adventure Race 2018 is now underway and in the spirit of the Vikings teams set forth from Stockholm, Sweden on an epic