The Circle of the Cirques 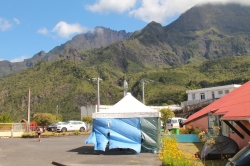 Into the second day of the race the first stage continues as the teams travel through the 3 vast collapsed volcano craters which are such a feature of Reunion.  Clustered around the peak of Piton des Neiges they are  all very close together, within a 12km radius but they are so deep, steep and fractured they are hard to access and cross.  All of which makes this first trek all the more remarkable. T to trek within all 3 craters in just over a day is almost unimaginable, but then that’s what adventure racers do – achieve what to anyone else is unimaginable.

The race has made little of this grand tour of the craters, Raid in France are old school and don’t go in for naming stages, but the impact on the teams is the same.

They began in the Cirque de Salazie and still have badly scratched and torn legs to show for their brush-bashing start to the race, before climbing across into Cirque de Mafate to find CP2. (With many, many climbs and descents along the way, because that is the nature of the terrain here.)

Mafate is the only one of the Cirques with no road access and is a major trip for hikers to get into, but the teams were passing through, finding a way up onto the rim and over into Cirque Cilaos for CP4. From there comes the last almost sheer climb up out of the crater and up to the summit of Piton des Neiges at over 3000m. I’m looking at the crater wall now and it looks impossible to ascent, but there is a path up. It is a relentless zig-zag trail climbing 1500m and then a further 600m up to Piton des Neiges.

And after teams have done the up and down climb to the peak at the top of the island they take a trail along the rim of Cirque Salazie, and pass about 1km about the start line in Hell Bourg, their circle of the cirques complete. (Though there is still quite a bit of the first trek to go.)