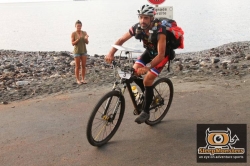 For the leading teams at ARWC 2018 on Reunion Island the end is almost in sight and the top five teams should finish sometime tomorrow after more than 5 days of gruelling racing.

Today the descended the volcano, right back down to the coast with a combination of mountain biking and trekking, and sometimes both together. Much of the way down was a bike leg descending the magnificent canyon of Riviere des Ramparts, but in the upper part they had to put on trekking shoes and push their bikes due to restrictions for environmental reasons asked for by the national park.

A cross country trek in sugar cane fields, two 50m abseils and a walk down a dry and rocky river bed brought them to the coast and the start of the sea kayaking stage.  It was here I caught up with the 4th and 5th placed teams, Salomon Black Hill Opavanet and Estonian ACE Adventure who were close together.

Both walked slowly out of the Saint Pierre river gully, trudging slowly along, barely lifting their feet and only occasionally lifting their heads.  As they passed Reeda Tuula looked over and said to me, “We are so footsore and tired. Did the other team look the same as us?”  They did.

Shortly after both teams were in transition preparing to paddle and as they did so the rain began and then got heavier and heavier until the ground all around their gear bags was awash and the kayaks on the ramp were nearly swept into the harbour.

The first thing I asked the Estonian team about was what happened at K20 yesterday, where they lost so much time.  Rain Eensaar told me, “We had a disaster.  It’s complicated but there was no sign of a ravine and we expected to find tracks not on the map.  All the checkpoints to up to then had been on the path and we thought it would be again, but it was in the jungle. Afterwards we looked and it was right on the map and we were angry with ourselves.

“We had try hard to get our motivation back,” he continued, “but we did, even though the trek up was on a difficult path with lots of mud and rocks.” He told me the lava tunnel cave was impressive, but the team didn’t see anything much of the volcano as they crossed at night. Those crossing in the day today wouldn’t have seen much either as it was cloud covered – they have probably been in rain all day.

Tomas Petrocek of the Czech team had a different story to tell of K20. “We missed it then went back and found it quite quickly and it really helped us.”  They managed to stay in 4th up and down the volcano but the Estonian team have pulled back and were only 10 minutes behind them getting onto the water.

Both teams only just made the 3pm cut-off for departure and were told they could only go as far as CP17 due to the Dark Zone on the water, so they’ll sleep there tonight and restart at 5.05.. That will fill both their sleep cards and they will race for 4th and 5th place tomorrow.

At the other end of the paddling stage Avaya had passed through (with their sleep card already complete), but Haglofs Silva and 400 Naturex were in transition together. Both these teams still had not taken their 12 hours sleep so Haglofs Silva had stopped for an hour, sitting at the beach bar and killing time. When I asked them how much time they still had to take they were unusually reticent and evasive, and seemed unhappy about the whole situation. Bjorn Rydvall just said, “It’s strange to be waiting around.”

They have more waiting around to do as they still have another 1 hour 10 minutes to sleep at a checkpoint and Naturex have 2 hours to take, so it will be a stop-start race for the podium places, but a close one.

As for Avaya they cleared their sleep card at CP15, and have managed their sleep as well as they have everything else in the race. They are unrivalled in speed, skill, tactics and team work and now have a strong lead to take into the finish, which is set up and waiting back at race HQ.  The race expect them to arrive between 2 and 6am.