The Russians Are Coming –Slowly 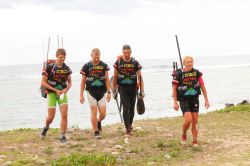 The two Russian teams in the race approached the finish today, looking close together on the tracking map, but as they were both moving slowly towards the finish the time gap was greater than it looked.

Just how slowly the Red Fox Adventure Team were moving became apparent as the walked along the finish trail at the Village de Corail. I’d say funereal but the pace was slower than that, the team were clearly struggling to walk the last few metres to the finish line.

They were accompanied by 3 local children, two of them in race bibs, who were holding their national flag for them and looking a little shy as lots of photos were taken of them.  On the line the team managed to post for a photo before collapsing down onto the grass, with Andris Ansabergs stretched out, his eyes closed.

They were without doubt the most beaten up team to finish so far and it was clear they wouldn’t make it to the podium a few metres away, so the deck chairs, flip flops, beer and pizza were brought to them, and even then getting into a deck chair was almost too much.  It took Ansabergs almost 10 minutes to move, and another 10 to get his shoes and socks off.

Beer and pizza were too unpalatable and he munched on Tuck biscuits with water, brought to him by his girlfriend Sandra. She was obviously used to seeing him at the end of races, and told me, “It’s been easier being here than it is at home, but it’s not easy being the girlfriend of an adventure racer.”

Ansabergs has been the team leader and when I’d seen him earlier in the race he was the energy driving the team, constantly talking and giving instructions.  Now he’d lost his voice and could not speak at all, and from the discussion among the team it sounded as though his foot blisters were infected. They were discussing which of them should see the medic first and it was a toss up between the infected feet and a deep gash on Konstantin Ivanov’s palm from a fall off his bike.

Vladimir Levchenko said, “What a race, it was all trekking and hard on the feet. We were trekking the first two days, trekking with the rafts and pushing the bikes most of the time.  Only yesterday’s paddle was a relief as we were not on our feet!” When I asked him if they’d seen the other Russian team he said no, and added; “They know where we are!”

Red Fox were only just moving again when their compatriots were about to come into the finish, but they didn’t wait to see them in. The Blizzard team were in much better shape, walking slowly yes, but comfortably enough and not in state of near collapse.

Natalia Zimina spoke for the team and her first reaction to the race was that it was too hard. “The stages were so long, too long I think to enjoy and appreciate. And I really don’t understand why we carried the bikes for so long? What is the point? I could get a piano for the team and we could carry that in training!”

However, when I pressed her a little better memories of the race came to mind.  “I thought the forest at the end of the big trek was beautiful,” she said, “so much green and so high, how could it be? And we saw giant pineapples in there that were almost red and thought it was amazing. We remember so much bird song as well, like we only hear in Spring in Russia.”

“The volcano was hard and so wet, but on top at 9 o’clock at night the whole sky cleared and we could see everything in the moon and starlight, it was amazing.

“For me the best stage was the coastal ride on the east coast, it was challenging but lovely and not too long. We had never seen the black sand before and one night we stopped and slept on it under palm trees with the sound of the ocean. Ruslan said we’d checked into a thousand star hotel.”

She told me they had spoken about beating the other Russian team before the race but said, “They are more like professional athletes with sponsors, we are a bunch of friends who tried adventure racing and were only an hour behind them.”  Incredibly this is only the team’s second expedition race. The first was Expedition Africa, which they won, and now they’ve completed one of the toughest AR World Champs courses in 14th place.

Even so she seemed disappointed when congratulated, “We wanted top 10 so I am not so sure we did so well.”  There are a lot of teams in the race who would like to have done as well, and with that kind of ambition this team will be a force to be reckoned with at future events.

[If you enjoyed this story and would like SleepMonsters to continue offering Adventure Race reporting then we need your help. Please support our Patreon campaign.]