Opening Ceremony-The Irresistible Pull Of PER 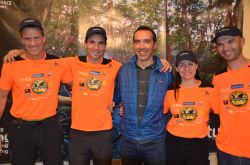 The opening ceremony and team check-in for the 13th edition of the Patagonian Expedition Race took place on Saturday, November 17th in the Teatro Municipal in Punta Arenas. It was an intimate, warm gathering.

The Teatro is an elegant building, rich in history, with cream coloured walls and chandeliers. The race organization had set up one of the race’s large tents in the middle of the room and this tent served as the registration and check-in space for the teams.

After check-in, teams proceeded to the second floor where the opening ceremony began at 20:30. The room was decorated with massive canvas prints of photos from previous editions and a wooden podium that volunteers had created especially for the opening ceremony which served to present each team.

The ceremony began with the projection of a short film with footage from previous editions. The race director, Stjepan Pavicic, then gave a speech welcoming the teams. He spoke of the passion with which he organizes this race, of the difficulties of not having corporate sponsorship or government funding. He also pointed out that the fact that the race continues despite the immeasurable organizational difficulties is a testament to the almost mystical pull that this race holds.

Two teams that would appear to respond to this mystical pull are East Wind from Japan and Bend Racing/YogaSlackers from the United States. This edition will be the sixth time at least one on the team has raced PER; both have raced in 2010, 2011, 2012, 2013 and 2016.

These two team's captains were called to the front of the room to speak about why they keep returning to race the Last Wild Race.

East Wind’s captain, Masato Tanaka, was noticeably absent. He’d had to fly back up to Santiago to get the teams’ bikes through customs. His three teammates, Machiko Nishii, Yasuhiro Takahama and Koki Yasuda read out a statement he’d prepared, in Japanese, English, and Spanish.

Jason Magness from Bend Racing/YogaSlackers is a gifted public speaker and he held the room, working well with Tarae the intern who was translating into Spanish by speaking short but pertinent sentences. He started by asking those in the room who were scared, to hold up their hands; there was quite a show of hands.

He went on to explain that he feels that life is about storytelling; he likes to think of the lines on his face as stories and that PER is a race that etches new stories onto his face. Jason has raced a total of 171 expedition races and PER holds a special place in his psyche.

In a pre-race interview he explained why, saying,

“I proposed to Chelsey on the podium of the 2010 race. We were engaged for the 2011 race, married for the 2013 race, and decided to start our own family during the 2016 race. I also went to India for a new hip after that race!”

“In the 2014 race we took a crazy route over two unexplored mountain passes, survived and named them Paso GearJunkie and Paso YogaSlackers”

“In the 2011 race that we finished 2nd, we used our thermarest pads to "swim" class II rivers instead of bushwhack, and nearly froze to death when we swam a 2km alpine lake trying to catch the Brits.

“In 2013 we carried packrafts, and used them to go off the map and cross fiords instead of trek the coastline. For a while the fog was so thick we could not see the land in either direction, even though it was no more than 3 km away.”

“In our first race, 2010, Chelsey's miscarriage and subsequent race was a cover story in Wend Magazine.”

“Since 2016... we've had a rough and beautiful time - giving birth to Max at the same time we lost his twin brother Spirit. We've written about that a lot since then as part of our therapy, and continue to race as a way to connect with Spirit in all the wild places of the world”

“You can read more on Chelsey's endurancemama blog, or hear it on the dirtbag diaries podcast "spirit". It might make you cry though - it does me.”

“Coming back to Patagonia this time is a chance for us to see spirit in the wind, rain, snow and grandeur that is the wilds of Patagonia.We'll be carrying some of his ashes with us and spreading them enroute.”

The evening closed with a stand-up buffet that allowed the ten teams to mingle and compare notes on what lies ahead.

Raw Racing on Day 3
The sun rose in PC-03, located in a cosy forest, relatively sheltered from the wind. Last night the media team of four uploaded our images

Preparing To Race The Last Wild Race
Teams have been travelling from around the world to the port city of Punta Arenas, Patagonia Chile. Judging from social media posts, the