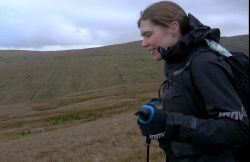 Both Paris and Roselló Solé started the day by increasing their lead over Eoin Keith (IRL). They continued to run together until they reached CP4 at Alston, 194 miles into the race.

However, even though they elected to rest, Paris pushed on ahead of Roselló Solé after just 45 minutes. She built up a commanding lead of almost seven miles before Roselló Solé rejoined the Pennine Way.

“I’ve slept about two hours 15 minutes so far. I’m really enjoying myself. It’s a mixture of type one and type two fun. I’m eating a lot but I’ve barely seen the others eating.” She continued,” I’m juggling being a parent with Ultra running and I have also got a thesis to write when I finish the Spine.”

At 10 PM GMT Paris maintains a lead of five miles in front of second place Roselló Solé.  She has covered a distance of 220 miles in the last 62 hours. With only 48 miles to go and with snow forecast on the Cheviots from late tomorrow it would seem unlikely that rest will be on her mind.  Keith remains third overall and second in the men’s race. He is currently resting at Alston but John Knapp (GBR) is currently at 150 miles and is closing in.

In the women’s race, second place, Shelli Gordon (GBR) continues to stay ahead of third place Gabriele Kenkenburg (DE) despite a swollen ankle.  At the time of writing Gordon has covered 160 miles. With only 10 miles between her and Kenkenburg, holding on to third place is not guaranteed.

The weather has been milder today with temperatures around 7°C and a wind chill of 4° C, cloudy with intermittent showers later in the day. Tomorrow Snow is forecast on Cross Fell between 10AM and 11 AM (heavy)then potential for light snow turning to sleet later.

Windspeed 25mph gusting to 50mph with windchill of -10° C. On Cheviots forecast is for a mixture of rain, snow, sleet and fog throughout the day. Windchill is expected to be as low as -11° C.

Heroism, Failure and Triumph: The race Across the Pennines to ...
Satoshi Funakoshi (JPN) becomes a hero while Colin Green (GBR) takes last-place to close seven days of racing in Britain's most brutal

Gordon Remains CALM to Finish and Raises 25k
As the MONTANE Spine Race enters its sixth night, Shelli Gordon completed her 268 mile tribute to her former partner to

Paris and Roselló Solé Share Lead
As the MONTANE Spine Race enters in second night, an epic contest for lead position is being played out across the Pennines.