Tumbles and Triumphs on Day One 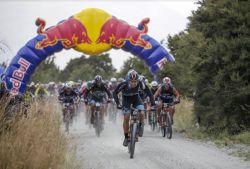 Richie McCaw’s teammate and multisport veteran Bob McLachlan takes a tumble on the technical stage one mountain bike, as accomplished multisport athletes Cameron Jones and Daniel Busch take the lead after day one.

Competitors battled changing conditions from the outset as Red Bull Defiance got underway in it’s fifth year. Riders battled windy conditions and 68km of technical terrain across three stages, including 1570m of vertical climbing on day one. Teammates McCaw and McLachlan racing in the new X4 category suffered an early setback as McLachlan crashed on a technical descent. “I knew I was going over the handle bars, it was a bit epic and a bit sore. But When you’re teaming up with Richie you know he can play a game of rugby with a broken foot, so you really can’t complain” said McLachlan. Vowing to continue, he went on to say “I did say pre-race even if we crawled across the finish line we’d get there, so now I have to live up to it.”

At the front end of the field, two teams battled it out all day as the morning sun made way for a wet and windy afternoon. Leading off the bike after stage one, Jones and Busch battled back and forth with Canterbury young guns Hamish Elliot and Sam Bell. Paddling hard to reclaim the lead in the final kilometres of the kayak, Jones and Busch took the win on day one in a total time of 04 hours, 51 minutes.

In the women’s race Kim Skerman and Nic Leary took line honours in a time of 06 hours, 3 minutes, with Austin Garden and Kath Kelly winning day one of the mixed team category.

Heading into day two tomorrow, athletes stand to battle worsening conditions as more rain and wind is predicted for Sunday.

Founder and creator of the two-day Red Bull Defiance event and three time champion Braden Currie gives his insight into what lies ahead for the athletes on day two.“Tomorrow could be a bit more of a challenge, Buschy (Daniel Busch) is a big man and I know that run’s probably going to hurt him. It’s going to be some pretty interesting racing to see how it all unfolds tomorrow” Currie says.

Young Guns Fight Back to Win Red Bull Defiance 2019
With unbeaten champion Braden Currie supporting from the sideline this year, the field was wide open in the elite category. And it was