Strength and Strategy at the Open5 South Lakes 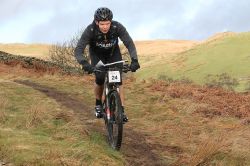 The 2019 Open5 race in the South Lakes was the biggest for many years, and over 200 competitors crammed into the Bryce Institute in the village of Burneside to register for a weekend of running, riding, navigating and strategy in the surrounding valleys and hills.

The Open5’s have been going for 14 years now as a 5 race series, but 2019 is a new era as it will now be a one-off annual event. As a result the many faithful Open Adventure followers grabbed their chance for this year and turned up for a bigger event where they could meet up with racing friends made over the years.

It was a tight fit into the hall, and a slightly theatrical setting beneath a curtained stage (recently used for Jack and The Beanstalk). From early morning racers registered and also collected their trackers, which was another innovation for this Open5.  Their race packs contained the two course maps, one for running checkpoints and the other for riding, but they would not get the points values for each CP until they crossed the start line, and there were dummy CP’s on the map too.

This resulted in lots of map speculation as they enjoyed tea, coffee and flapjack before the start, which is all a part of the sociable Open5 experience. There is plenty to think about as the score format for the race tests strategy to the full.  Within the 5 hour time limit racers must run and ride, but how much of each they do is up them. And on each section the course and route they take are up them as well.  Their aim is to get as many points from visiting CP’s as possible ... or just to go to the best bits of the course and have a great day out if they want.

The start was 3 miles down the road in Staveley in a playing field on the edge of the village, and the first choice was whether to run first, or to ride. Then having been given the points values on the start line the second was to figure out where to go, how long it would take, and come up with a plan.

Two of our volunteer SleepMonsters editors were on the start line, and they took different options. Carrick (Pyro) Armer set off on his bike because, “I’m better at riding than running,” while Adam Rose set off on foot because, “That’s what I always do first!”

In no time at all the competitors were scattering into the hills on a morning that was still misty and overcast after the previous day’s storm had blown through. There was plenty of evidence of this and the recent snow melt on the often flooded tracks and roads, and slippery, sodden hillsides, but the weather gods were kind and it soon turned into a fine, sunny winter’s day.

Both courses had CP’s scattered either side of the Kentmere valley with 17 ride and 19 run options, and more points overall for those on the ride. One option on the ride was to take on the classic route over the Garburn Pass and opinions were divided on this.  With only a lowly 5 point CP near the top some thought it not worth the effort.

Mark Chryssanthou got his 5 points then said, “It was a slog and not worth it as it was such hard work”, while eventual solo winner Tom Gibbs said he walked much of the descent. “It’s rocky and easy to come off so I was cautious,” he said.  Corinne and Andy Parsons rode over on their tandem and Corinne said, “We didn’t ride all that much of it, but we got a few points, some fantastic views and we wanted a good circular route. Open5’s are good at putting checkpoints in places you want to go and with some good views when you get there.”

Andy wasn’t quite so impressed with CP6 on the slopes below the pass however. This was on a tree in the middle of stream with steep banks, so it was a tricky scramble and a wade to get there. “We tried coming at it from 3 directions,” he said, “and still got wet feet which never warmed up for the rest of the ride. It might have been a better running checkpoint!”

One of the highest run checkpoints was on Brunt Knott which has a 360 degree panorama but was a steep climb to reach and not the place to stop and check the map for too long.  It might have been sunny but the winter wind was still chilling.

As the 5 hours ticked away competitors came back into the finish, some relaxed as they were nice and early and others racing hard to the line as they were late and losing points. (Every minute late means hard won points lost!)  James Thurlow of Open Adventure had advised newcomers to ‘not be greedy’ and the Parsons were back early on their tandem having pushed to get extra checkpoints in the past and then lost more points than they’d earned. “From experience we apply the rule - If in doubt leave it out.“ Corinne said.

On the finish line and back in Burneside groups were gathered around their maps discussing who went where, what if’s and should have’s.  The Bryce Institute was packed with racers enjoying chilli, soups, hot drinks and cake as they recounted the day and studied the maps yet again while the results were quickly worked out.  Looking over the lively hall abuzz with shared experiences from the day James Thurlow said to me; “This is one of the most important parts of the event for me.”

Almost everyone stayed for the prize giving, and some of the results were very close, but not all.  Tom Gibbs was well ahead in the Male solo’s.  When his total of 580 points was announced there was a murmur of approval and astonishment around the hall as he’d missed only two biking CP’s.

He was 60 points ahead of Mark Chryssanthou who had said on the finish line, “I completely mucked that up. I’m useless at strategy and navigation!” He was surprised to be second! He also had the quickest transition of the day at a lightning fast 43 seconds!  (The most relaxed was over 26 minutes.)

In the female solo’s Jane McCarthy won with 425 points while Rosemary Byde and Lucy Spain were clear winners in the female pairs, despite losing 20 points for being late and missing a 30 point CP on the run in to the finish!  The male pairs winners were Alex Pilkington and Michael Mason and the mixed pairs was won by David and Kim Spence.

James Thurlow wrapped up this year’s race by saying it would be back next February, hopefully in the Yorkshire Dales, and reminding everyone about other Open Adventure events in the year, including the ITERA expedition adventure race in Scotland in August. (That one will be planned by Tom Gibbs and is a little bit longer – 5 days rather than 5 hours!)

The full results, tracking and links to the event photos are all on the Open Adventure website and Facebook page.