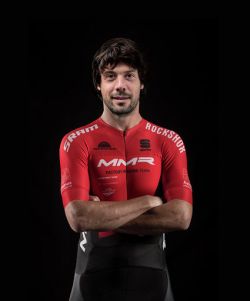 As a former three-time World Champion whenever Óscar Freire pins a number to his kit he attracts a great deal of attention. Even if those victories came on far smoother roads than the ones he will need to conquer, alongside Natalia Fischer Egusquiza, in the 2019 Absa Cape Epic. Freire is after-all cycling royalty and given Fischer Egusquiza’s impressive off-road palmarès the MMR Mixed pair starts as favourites for the Virgin Active Mixed Category.

While Freire, who along with Alfredo Binda, Rick van Steenbergen, Peter Sagan and Eddy Merckx holds the record for the most road world title victories, needs no introduction his partner is less well known. Fischer Egusquiza is a multi-disciplinary talent; having raced on the road and in duathlon as well as triathlon events, in addition to her budding mountain biking career. She has proven herself to be particularly adept at the marathon distance; claiming the 2017 and 2018 Spanish XCM national titles while finishing nineteenth in the World XCM Championships last year.  “I’ve changed my preseason planning this year because I will focus on XCO racing this season” the 25 year old MMR Factory Team rider explained. “I have been working so hard in the gym and I’m racing stage races, with the team, to build my base for the season ahead.”

“I’m really excited about racing the Absa Cape Epic this year” Freire enthused. “Last year I didn’t train as much as I wanted to, but this year I’m racing with the MMR Factory Racing Team and I have raced a few stage races like the Mediterranean Epic to prepare the Absa Cape Epic. I’m more like a diesel car now” he laughed. “But I think my teammate Natalia Fischer [Egusquiza] and I will have a few opportunities to fight for the win on a few stages. We aim for a really great position on the GC, she is a superclass rider and we are working hard to make a good race” the 42 year old elaborated.

Continuing the theme of playing down their chances, in what is shaping up to be a highly competitive Virgin Active Mixed Category, Fischer Egusquiza added: “Óscar has a lot of experience on and off the bike. I’m learning a lot from him and there are two stages where we want to go for the win. To fight for the GC is hard but we will give 100% for it.”

The battle for the green jerseys is likely to rage all the way to Val de Vie with the MMR Mixed team facing off against compatriots Ramona Gabriel Batalla and Antonio Moreno Ortega, of Garmin Ixcor. Gabriel Batalla like Fischer Egusquiza would be equally at home in the UCI women’s field, but has chosen to also make her Absa Cape Epic debut in the Virgin Active Mixed Category. Other contenders for the category include Martin and Jeannie Dreyer; Sebastian and Laura Stark; Swiss Epic mixed category podium finishers Benjamin Michael and Hannah Kölling; and accomplished IRONMAN athletes Emma Anderson Cryns and Jose Antonio Peña Salcedo.

Freire and Fischer Egusquiza head up a strong Spanish assault on the Virgin Active Mixed Category with three of the top six teams flying the Rojigualda. As the former World Champion explained the event is more popular than ever with his country-men and -women: “The Absa Cape Epic is one of the best races in the world. Every team wants to fight for a spot on the start line and racing among the scenery of South Africa is more than amazing. The marathon scene in Spain is growing amazingly fast, so our cyclists want to grow their ambitions and fight with the best racers worldwide.”