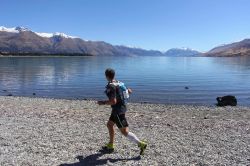 Englishman Keith Burrows stormed home 55 minutes quicker than last year’s winning time on the on the second day of the Anchor Milk Otago Alps 2 Ocean Ultra to consolidate his lead in the men’s supported category of New Zealand’s only stage race ultra-running event.

The event started on Sunday in wet and windy conditions with 120 runners from 15 countries and after seven stages over seven days and 323 kilometres it will finish in Oamaru on Saturday. Today’s 50 kilometre stage took runners from Lake Pukaki to the secluded Lake Middleton that sits next to Lake Ohau in the Mackenzie Basin.

With the improving weather matching the improving times Burrows has a combined time of eight hours and 49 minutes after two days and three stages to lead Wellington runner Paul Hewitson by 11 minutes heading into tomorrow’s gruelling race defining 88 kilometre Queen stage that’s starts on the shores of lake Ohau and ends at Loch Laird at the top of the Waitaki Valley after two tough climbs of over 800 metres.

“I did see the times from last year, but didn’t know exactly what the terrain was like, but thought I could be up there and be competitive,” Burrows, who is tackling his first ultra-race stage race event, said.

Having moved out from London nine months ago and settled in Auckland Burrows echoed the thoughts of many of the runners in New Zealand for the first time saying the event was a “magnificent way to see the countryside.”

Chris Coolican from Canada stills leads the men’s unsupported event, where runners have to carry their clothing and sleeping bags, by 14 minutes after losing five minutes on today’s stage to good mate, Tim Franklin from Australia, as he struggled with a hip and calf strain.

“Just getting to the finish on Saturday will make me happy now,” Coolicon said. “I came here for spectacular views, to see New Zealand and to meet up with some friends I met racing last year so all of that is going really well. Tomorrow could be a long day for me with my hip and knee, so I think I’ll start off really slow in the interests of self-preservation and see how the days goes from there.”

With a combined time of 10 hours and nine minutes Katy Anderson leads the women’s supported event from Kiwi’s Kerryn Bell and Kelly Sutherland who are locked together 39 minutes behind the experienced Australian ultra-runner.

“I got persuaded by a friend that this would be a fantastic way to see New Zealand, and it is,” Anderson said. “I do have experience with 160 kilometre 30 hour events but this is my first stage race so I haven’t really got any expectations so I am a little surprised to be leading. I just want to enjoy the event and it’s great that we get to run all day and then someone puts up our tent at the end of the day, what more could you want?”

Queensland runner Sarah Foster has been the first unsupported women home on both days so far, with her combined time of 10 hours and58 minutes giving her a 14 minute buffer over Emily Kratz from the United States heading into tomorrow’s toughest stage of the week.

“I’m feeling ok except for my back and my shoulders that are a bit tender,” Foster said. “Other than that, my legs, feet and everything else in pretty good. Long stages like tomorrow make me a little bit nervous, so I just need to get past the 60 kilometre mark and then I should be fine.”