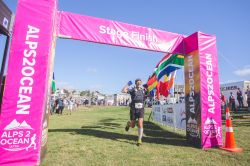 Wellington runner Paul Hewitson started this morning’s final 28 kilometre stage from Peaks Road in North Otago to Oamaru six minutes behind Jason Rawlings from the UK with a combined time of 29 hours and 30 minutes.

Keen to close the gap Hewitson set a hectic pace that both Rawlings and men’s supported leader Englishman Keith Burrows struggled to hold, eventually storming home in the day’s fastest time of two hours and four minutes to claim second, finishing the event only four minutes ahead of Rawlings after seven stages and 323 kilometres of racing in a time of 31 hours and 34 minutes.

Burrows ran the day’s second fastest final stage coming home three minutes after Hewitson to hold onto his men’s supported lead with an overall combined time of 30 hours and 44 minutes, 50 minutes ahead of Hewitson.

“Today was very hard, the two boys in front went out really hard,” Burrows said. “So I just tried to hand on as best I could and thought if I run this fast they have to finish in an hour and a half which they weren’t going to do.”

“Me, Jason and Paul, we all run together, they’re great guys and we all support each other which makes it all the more special. I’m just pleased that’s its now over and its finished, as I was pushed so hard by the other guys so winning was a lot harder than I expected.”

In a close battle in the women’s unsupported event where runners have to carry their clothing, food and sleeping bags, Queensland runner Sarah Foster finished the final stage six minutes ahead Emily Kratz from the United States but Kratz held onto her overall lead, winning the event with a time of 37 hours and two minutes, 18 minutes clear of Foster.

Kiwi Jamie Stevenson was third in the women’s unsupported event, three hours and 14 minutes behind Foster.

With a combined time of 35 hours Australian Katy Anderson won the women’s supported event by one hour and seven minutes from New Zealander Kelly Sutherland, and was an impressive fourth overall while Sutherland was seventh.

The men’s unsupported race was won by former US Special Operations Ranger Seth Campbell who now lives in New Zealand with a time of 35 hours and 18 minutes, 46 minutes ahead of Tim Franklin from Australia. KIwi Mark Cross rounded out the top three finishing one hour nine minutes behind Franklin.

The Anchor Milk Otago Alps to Ocean Ultra started at Mt Cook on Sunday with 120 competitors from 14 countries with 98 making it to the finish line in Oamaru.