The Journey to the Beginning 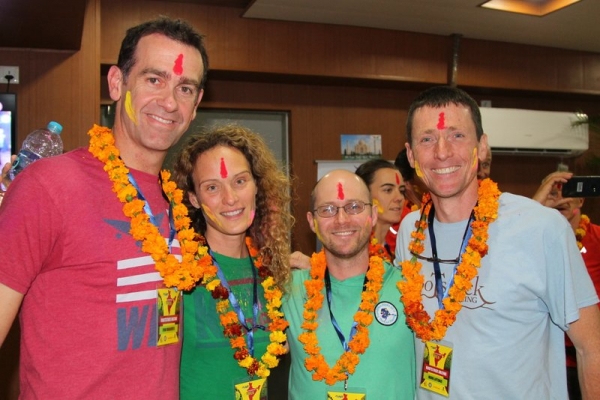 The maxim that getting to the start line is the hardest part of the race has never been more true than here at Expedition India.  Around midday on Thursday the buses carrying teams arrived at the luxurious Anant Maya hotel in Manali to bring to an end of 3 days of arduous travelling; from home, to Delhi, to Manali and with some mishaps and memorable experiences along the way.

The teams gathered at the Centaur Hotel near the international airport at Delhi during Monday and for some their introduction to India was seeing their boxes tied to the top of battered taxis with bits of string, or kit bags just thrown on top with no strapping at all!

The huge Centaur Hotel was a handy haven with ample space for all the gear inside its vast atrium, and the travel dazed and delayed teams could rest up there.  (Many were delayed due to Pakistani air space being closed.)  Those who wanted a room faced a registration form of mind boggling complexity however others left their bags and set off to sightsee or took the chance to visit nearby markets. Thunderbolt AR from Australia had been in Delhi for some days seeing the Taj Mahal, and the sights and Bern Dornom told me, “We’ve been having a fantastic time and making the most of our time here.”

Heidi from Kinetic Adventure was in reception to welcome teams and was busy chasing airlines about bikes and baggage lost in transit, and later dealing with the media team from South Africa missing a connection due to a customs hold up. They would miss the departure of the buses to Manali on Tuesday evening, but somehow got new tickets to Delhi and flights to an airstrip near Manali to catch up.  And in the process they missed the 20 hour bus ride!

The teams left Delhi on 3 busses on Tuesday evening, but before leaving the city they were hosted at a welcome held event by Indo Canadian, the company providing the buses. Garlanded and with their foreheads marked with the red Tika dot on arrival they were suddenly a more colourful crowd!

With such a long ride ahead the comfy buses with reclining seats and air con helped make the ride that much more comfortable and the sponsoring company said they wanted visitors to have a modern experience on their arrival in India. They also had another taste of Indian custom when Ajita Madan who is racing with Team Nth Adventure explained, “It’s our custom to have sweets when starting a journey so I have made traditional home-made sweets for you to taste.”

Soon it was time to head out into the madness of the Delhi rush hour, get used to the cacophony of horns and to marvel at how anything moved at all and the vendors standing in the middle of all the traffic survive. The sound of horns was to accompany the whole journey, often from the race’s own drivers as they exchanged honked coded messages with the vehicles around them. It didn’t make sleeping any easier.

Traffic was congested, roads poor and bumpy and once into the mountains there were many landslips to bounce across, so it was a slow journey, but a continuous one.  (There were only two stops on the way for food and toilets.)  The final stage in the Manail valley was one huge traffic jam, not helped by the fact the valley was closed by the heaviest snows for 20 years just a few weeks back, so there were many landslides to pass.

The buses could not get the whole way to the hotel so the final stage was in mini-buses, taking an hour to cover the last 5km, but finally the racers arrived at the Anant Maya, and it was just what they needed to rest and recover.  It is a very luxurious base for the race in Manali, and teams were again welcomed with a tika mark, and spiced drinks, and also this time with an embroidered Kullu cap placed on their heads!  (These circular hats are traditional to the valley.)

In no time they were settling into spacious apartments with views down the valley and of the snow peaks at its head. This helped ease the aches from the long ride and those who hadn’t managed to sleep overnight now had a very comfortable bed for fall into.  Two of the Rootstock Racing team told me they’d not slept much at all. Brent Freedland said, “I’ll try and stay awake until tonight now, because if I sleep in the middle of the day it’ll mess me up tonight.”  But his team mate Mark Latanzi had other ideas. “I’m going to sleep as soon as I can,” he said.

The Estonian ACE Adventure Team were not seduced by the comforts of the hotel and were keen to hike up the valley side and stretch their legs on this rest and recovery afternoon.

There was however one activity teams could join in with in the afternoon if they wanted and that was the race’s own Holi festival celebration.  In this coloured powders are thrown over anyone nearby in a riotous celebration and though it took place yesterday in Manali, the race decided to hold their own today!  Those who took part were soon throwing brightly coloured powders in the air, onto others, and then smearing it across their faces. Of all the Indian welcomes they’ve had so far this was by far the most colourful and unrestrained!

Tomorrow the race procedures begin, with registration aneams will get their first team information in the morning.  The journey is over, they’ve received an Indian welcome and awakening, and now the race can now begin!

A Celebration of the Incredible Expedition India
Expedition India closed with the race party and prize giving last night after 5 days of extraordinary adventure racing. The party had a

Naturex Win Expedition India
Having lead for much of the race, and with a big lead over any chasing teams, Team Naturex of France crossed the finish line at Koti

Taking the Himalayan High Road
Into day two of the race the field was rapidly spread out as teams completed the first trekking stage, then an additional trek to replace a

Down The Kullu Valley On Day One
Day one of Expedition India served up a full variety of challenges and experiences as teams raced down the Kullu Valley. The start in

Riders of Rohtang - XPD India Gets Underway
Expedition India was never going to deliver an ordinary start, or an easy one, but it was spectacular when teams finally got underway

Flying the Flag For India and Adventure
“Whatever it is, it’s an Adventure!” That was Silver Eensaar’s summary after his team Bend Racing had been through

A Himalayan Journey and An Indian Adventure
There can few more iconic and alluring locations for an expedition adventure race than the Himalaya, and in a few days time 26 lucky teams