What A Start To The Ötillö Swimrun Season At Hvar 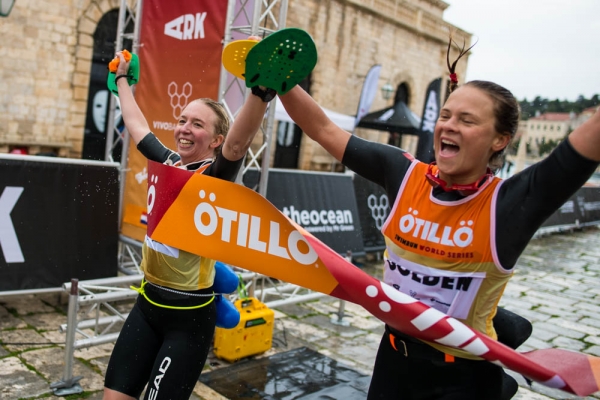 The 2019 ÖTILLÖ swimrun season kicked off with a very tough race. It ended up being a hard fought battle for the 3rd edition ÖTILLÖ Swimrun World Series event on the island of Hvar, Croatia.

The Mediterranean setting had all the ingredients to make for a spectacular yet very tough swimrun race. The original  40,4 kilometres long course had to be changed as the currents made it to a true test, alternating technical trail running with long, challenging stretches of open-water swimming.

The Winners Jonas Ekman Fischer and Lars Ekman (SWE), Sailfish Team Bröderna Bäver, managed to pull away from the leading pack and cross the finish line as the first team after 4:51:51, almost 7 minutes ahead of Julien Pousson and Nicolas Remires (FRA), Team Envol.

“There were a lot of good teams in the front today, especially in the swim sections. Before the long run we just felt let`s go for it and we managed to gain a couple of minutes on the rest of the field in the uphill. We are very happy with the win and the good start into the season.”, said Jonas Ekam Fischer after finishing as overall winner with Lars Ekman (SWE), Sailfish Team Bröderna Bäver.

The island of Hvar, part of the Croatian Dalmatian islands, is considered one of the 10 most beautiful islands in the world. With its rich cultural and historic heritage, ancient olive trees and vineyards, crystal clear waters, limestone rock and varied terrain, surrounded by the fabulous Pakleni islands, Hvar is the perfect destination for a ÖTILLÖ swimrun race. There is no doubt that Hvar lives up to ÖTILLÖ's claim of having unique races in unique places!

The original 40,4 km race course of ÖTILLÖ Swimrun Hvar had to be changed due to strong currents in the channel between Hvar and the Pakleni Islands. The crystal blue sea was at around 15 degrees and the longest swim crossing of 2 950 metres was shortened to about 2 700 metres. Still a true test for all competitors. The rainy weather made the conditions different for all the racers depending on where you were in the pack, it became a big challenge. A big part of the trail running was on technical trails, with a few tough climbs spicing up the challenge.

Several teams had to struggle to make it in time for the two cut offs. Some had to abandon after the long swim. The top teams pushed each other hard, chasing each other in a tight group all the way to the last swims before the finish line. The level of competition is mind blowing!

At all ÖTILLÖ swimrun World Series events teams race in pairs. Working wisely with your partner is decisive. Using each other’s strengths will push boundaries. The team experience is incomparable and can only be fully understood by those who have practiced it, and is part of why swimrun is growing so fast in popularity.

142 teams of two from 23 different nations travelled to Hvar to compete in the ÖTILLÖ Swimrun Hvar, a qualifier to the ÖTILLÖ Swimrun World Championship in the Swedish archipelago. The day prior to the race two shorter more accessible race were organised, the ÖTILLÖ Sprint Hvar and the ÖTILLÖ Experience Hvar, offering the same flavours as the longer more challenging race but in a smaller format.These races had close to 150 racers registered from a total of 20 nations.