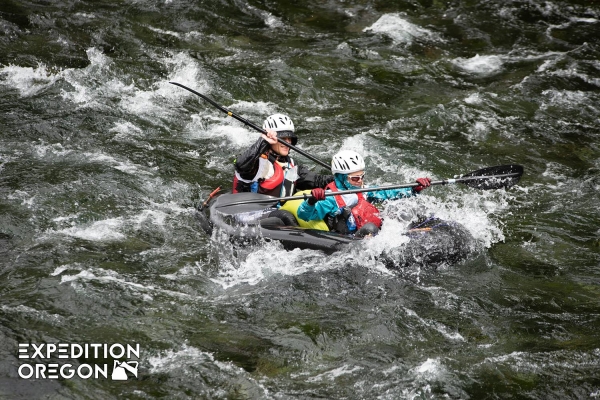 Before the start of 2019 Expedition Oregon racers have been speculating on where the course will take them this year.  Last year's event was a ARWS demonstration event, and spanned nearly 200 miles over 3.5 days.  It saw racers traversing over the Cascade range and descending into the small cowboy town of Sisters, before finishing in Bend.

This year, as a full ARWS qualifying race, Expedition Oregon has added 50 miles and 1 day of racing, allowing teams up to 4.5 days to complete the course.  As in all adventure races, team members must stay together at all times, and if one person drops out, the entire team becomes unranked.  ARWS rules require co-ed teams of 4 in order to qualify for the $5000 prize purse, series points, and the free entry into the 2019 World Championship race in Sri Lanka.

Like last year, the event will be very "technical" in nature, requiring teams to not only have good navigation skills,  but also to be able to move through serious terrain - including snow covered mountains, jagged lava fields, white-water river canyons, knife edge ridges, single-track mountain biking, rock climbing.

The organization has confirmed that the race will finish at LOGE Bend, but they have only hinted that the remote start location will look a lot more like winter than spring.

Teams will begin to arrive in Bend from all over the USA and Canada, and as far away as France, Sweden, Uruguay,  Mexico, and Spain.  Last year the winning team "Leki/SweDan" was comprised of Swedish and Danish athletes, with "Bend Racing Canada" taking second, and Washington based Quest AR rounding out the podium.

This year, Sweden in sending another top team to defend the title, as the captain of last years champion team has been recruited by Bend Racing Canada.   The French are also strong international contenders, with a very experienced squad that have some strong finishes at previous world championship races.

But Bend Racing Canada, and Quest AR are also both back looking to make a move further up the podium this year.  Several more top American teams though will make those 3 podium spots a real fight - particularly Bones Racing, Untamed New England, and Mountain Race Company.

All in all there the field is stacked with some of the most experienced US based teams in the sport.  But on the other side of things, one team is jumping into the Adventure Racing deep end.   Aptly named, team "Around the Bend" is made up all locals.  But only team captain Megi Morishita has ever done an adventure race.  And the race she did?  The Lapine Loop - a 6 hour course at a nearby state park.  But she was hooked and couldn't pass up the chance to test herself in her own back yard.   Also unique, the team is made up of 3 women and 1 man.

Course designer Jason Magness has been pretty tight lipped about any race details, but he has said that the event will showcase some of he and his wife Chelsey's personal training grounds for the past 8 years.  The couple moved to Bend in 2010 in the hopes of racing on the pro circuit.  Within 3 years, Team Bend Racing/YogaSlackers was ranked in the top 10 in the world.  Teammates Daniel Staudigel and Stephen Thompson (also Bend locals) have been helping with course design, vetting, and are a big part of the reason Jason feels comfortable creating such difficult courses.

"Knowing that Chelsey, Stephen, and Daniel are part of the creation process and safety plan gives me peace of mind.  If I ever create something too crazy, they let me know - but mostly they help me realize when I am not thinking big enough.  We design courses that would excite us as racers....and we figure out how to make them possible in the event."

For event coverage, Bend Racing's award winning in-house media team is ramping up for some serious work.  With multiple video, photo and editing professionals, as well as online correspondents fans can follow the action through Facebook, web and live tracking sites.

An International Mash Up At The Front And Still Anyone's Race
48 hours in to the race, there is a definitive pack jockeying for positions in the top 5.  After the fast start in the mountains,