Dark Zones And The Brutality of Night 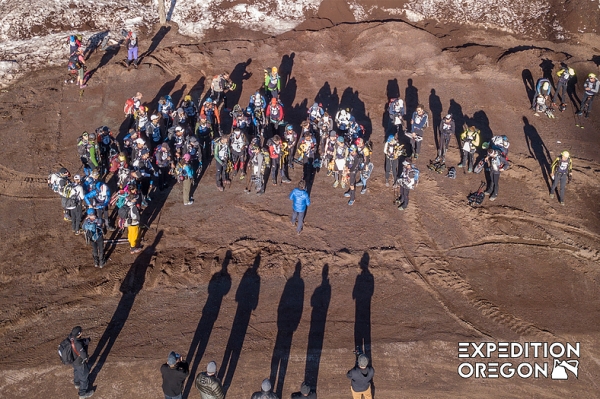 On stage 1, the excitement was high, conditions perfect, and teams smashed through one of the most beautiful adventure race legs imaginable. Sure there was climbing, but for top teams it was moderate to easy, and for mid and back pack teams, they got to follow an increasingly solid snowshoe trail - easing both navigation difficulties and travel.

And the scenery on the bluebird day must have been a bit mind-bending for anyone who isn't at least a part time mountaineer. From the summit they could see the climb site at Smith Rock over 80 miles away.

The only real challenge was when teams were less than 3 miles from the finish line, approaching the stage's last CP on the top of a small, obvious, and fiercely guarded butte. Manzanita flanked the hilltop in thick bands cut through only by a ring road that circled the butte lazily at a pace and length most teams were unwilling to take. Good for them I say. The damn point was at the top, and no reason to hike an extra 4 or 5km slowly spiraling to the top.  And there they were only 3km from the CP with flapping flags inviting them down the other side of the manzanita monster. Some teams took 3 hours to figure out how to get up and down that little hill - all while the TA staff sat near a burbling shallow creek watching them with binoculars.

Stage 1's final challenge came from an unexpected place - that little brook.  And when I finally write an AR book, this will be a whole chapter. The brook feeds a lake, and on the map, it looked like it was a double wide line at near the TA and a single width line a bit further south. But in reality, at this water level, it was a thigh deep wade everywhere.

Most teams approached along a road that led them to a campsite on the opposite side of the river of the TA, walked along the river to a bend, and then headed directly AWAY from the TA to bushwhack in search of a bridge. The map showed a small trail crossing the river about 500m from the TA.  But when most teams veered to look for it, they were already within 200m of the actual TA... flags, volunteers waving at them, other teams inflating boats...

And here is the confusing thing to me as an observer - the river did not look big or deep or dangerous at all. 10m across. And the next stage was packrafting...they were about to get into the river anyway. And no one really stays "dry" on paddling stages in AR. So what gives?

Some teams took over 30 minutes (we timed it) to get to the TA from the time they were 200m away.  Even Bones, one of the best in the world, came close to us and the river, and then trekked away to the south looking for a bridge or crossing or something.  Mountain Race Company, showed up several minutes behind them, walked straight toward the TA, waded the river, and made up 10 minutes at the price of a few wet feet.  But not even that really, cause there was no bridge, so that was the price of entry for everyone...

It was an interesting 4 hours watching this play out again and again with only Quest, Bend Racing, MRC, Adventure South, and Spotted Kiwis taking the direct route.

The best part about seeing that as a race director instead of a racer-- it make we wonder in awe about how many decisions my team has made over the last 15 years of racing that had some other RD and TA staff people scratching their heads dumbfounded.

Ok, but back to the race.

Teams entered the first night all keen on getting across the lava before dark and making the river (stage 5) before the dark zone.

They won't make it.

I didn't have the heart (or confidence) to tell them, because they all looked so fast and strong pre-race and even at TA1.

The second stage times of 10-20 hours, as I told the racers repeatedly, are for daytime and a fast team on a good day after a night of sleep. Maybe Chris Forne (of Seagate fame) can make every stage seem like he is doing it in daylight and after a nice 8 hours of Z-time. But most of us can't. Night saps our drive, willpower and proprioception. Our body uses more energy to stay warm. Navigation is more difficult.  We drink and eat less without realizing it, and just get less reward along the course for every effort.

Night is part of what makes AR what it is.

Add to that a paddle leg with lots of possible routes and transitions as teams choose between packrafting and trekking. Add the high desert's temperature swings that will have dropped below freezing around 5AM...it was a tough night for teams all over the course.

The Swedes of Naturkompaniet Pioneers have taken over the lead, with USA Quest close behind and Bend Racing Canada making big moves up the ladder into 3rd after a rough start. They are followed closely by the French, and several other top USA teams....all of whom will be radically changing their strategy today.

They may not realize it yet, but they'll soon switch from asking "can we beat the darkzone?" to "Can we even make the dark zone?".

Good luck teams. It does get easier. If not now, then for sure at the finish line.

An International Mash Up At The Front And Still Anyone's Race
48 hours in to the race, there is a definitive pack jockeying for positions in the top 5.  After the fast start in the mountains,