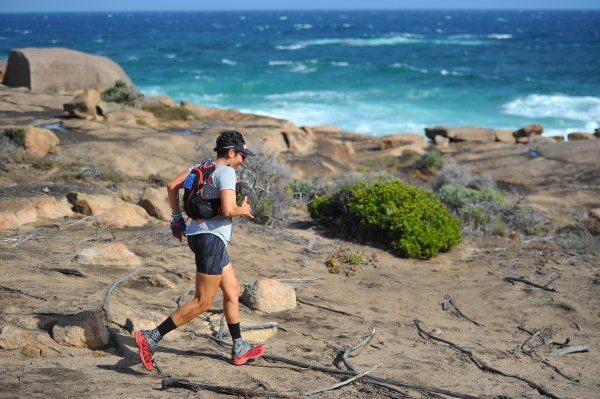 Perth’s Justin Scarvaci bolted onto the home straight to win the Margaret River Ultra Marathon Saturday May 4. The 2019 champion won in a new course record time of 7:46.26 despite howling winds and whipping sand.

“It was a hard course, really brutal. There were strong headwinds as you could see. The sand section was horrible but yeah I got through it OK. I just tried to stay focused on making ground on some of the relay runners. I was running in their footsteps in the sand and trying to get through it,” Scarvaci said.

The road-running star was impossibly fresh at race end despite the challenges, “Yeah, I feel alright at the moment. I could probably keep going!” said Scarvaci.

Deb Nicholl doubled up and added to her 2018 title, winning the women’s event and completing the course in a touch less than nine hours—12 minutess slower than her 2018 run.

“I can’t believe it. This year has been so hard mentally and physically. I’ve been carrying a really bad Achilles heel injury since last November,” Nicholl said.

“It’s been a really tough battle. I haven’t been able to train or do anything. I just kept digging deep and tried to put a smile on my face. I just love this race so much.”

More than 850 passionate runners from across Australia participated on the day. Some boarded the bus at Cheeky Monkey brewery for an hour long trip down to Hamelin Bay for race start. Others were dropped by family and friends making a weekend of the festivities. Race entrants were greeted by a bustling crowd and pop tunes for the start of the 80km trail.

The sun shot up over the horizon and competitors headed straight into a tough uphill section of four wheel drive tracks. A scenic and winding journey in awe-inspiring Karri tree forests, cliff top trails and sweeping ocean views ensued.

And the point-to-point course was tackled by individuals and relay teams of up to five runners divided into five legs between 10km and 20km in length. Nearly 220 solo runners tackled the 80KM course with the remainder joining their friends in a relay race.

The Margaret River Ultra is designed as an achievable run for all levels, from elites through to trail running newbies. Following the premier event on Saturday was a fun two kilometre Kids Run at Cheeky Monkey brewery on Sunday morning.

Part of the allure of the Margaret River Ultra is combining trail running with a visit to one of Australia’s most spectacular regions—Margaret River in south-west Western Australia. The course is a stone’s throw from world class wineries, cafes and surf beaches.

For more information on the Margaret River Ultra Marathon and full list of results from all of Saturday’s racing head to www.MRUltramarathon.com.au.