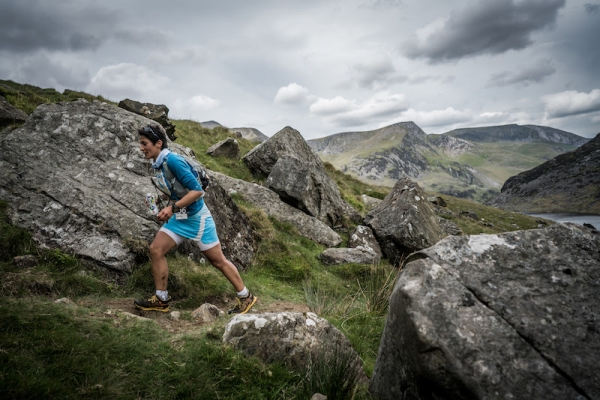 After months of hard training and dedicated preparation, less than two weeks remain until over 400 brave participants set off from Conwy Castle on their challenging journey down the mountainous spine of Wales. This is the Berghaus Dragon’s Back Race® - the toughest five-day mountain running race in the world. As excitement continues to build for the start of this legendary event, it is time to think about who to watch out for as the action unfolds. Previous winners and runners-up will return to do battle with new challengers in the quest to win the 2019 Berghaus Dragon’s Back Race®.

In the women’s race, Sabrina Verjee will be back for her third Berghaus Dragon’s Back Race® after finishing fifth woman (14thoverall) in 2015 and second woman (13thoverall) in a very close 2017 race. With so much previous experience of the route, she will hope to use this to her advantage and finally come out on top in 2019.

However, there are many who will surely challenge her, including Berghaus athlete, and running journalist, Sandra Mastropietro from Germany. She will be taking on this race for the first time, but comes to the event with plenty of experience as a three-time finisher of the GORE-TEX Transalpine Run – a seven-stage trail race traversing the Alps from Germany to Italy, and also the 102-kilometre Zugspitz Ultratrail which takes in 5,500 metres of ascent through the German Alps.

Lowri Morgan is a Welsh television presenter, adventurer and marathon runner. Among her many adventures, she has completed the Jungle Ultra Marathon, a 140-mile event in the Brazilian Amazon, and was one of only 50 participants (out of 150 starters) to complete the course. She also successfully completed the notorious 350-mile non-stop footrace in the Canadian Artic, the 6633 Arctic Ultra. A potential dark horse in the women’s race could be Sheffield-based Dark Peak club runner Lisa Watson. Earlier this year, she finished in fourth overall and first female team on the notorious High Peak Marathon and won the coveted Edale Skyline in March.

In the men’s race, Jim Mann is returning for his fourth Berghaus Dragon’s Back Race®, after having finished sixth in 2012, first in 2015 and second in 2017 following a closely fought race with eventual winner Marcus Scotney. Mann is as hungry as ever and determined to challenge for his second win.

Another hot favourite in the men’s race has to be newcomer to the event Robert Barnes. In 2018, he won the Cape Wrath Ultra®, the sister event to the Berghaus Dragon’s Back Race® also organised by Ourea Events. Another challenging ultra-running expedition race, the Cape Wrath Ultra® traverses 400km over eight days through the wild Highlands of Scotland to finish at the spectacular Cape Wrath lighthouse, the most north-westerly tip of UK mainland. Barnes looked pretty comfortable winning in Scotland, but it remains to be seen how he will fare over this rougher and rockier route through the Welsh mountains.

There are plenty of other top runners to keep an eye out for, including Berghaus athletes Wouter Huitzing (Netherlands) and Stef Maginelle (Belgium). Huitzing is returning for his second Berghaus Dragon’s Back Race® after finishing 16thoverall in 2017. There is every reason to believe that he is coming back stronger and more experienced, after having secured a win in the non-stop 108-mile Spine® Challenger race last year with a new course record of 25 hours, 42 minutes and 21 seconds.

Galen Reynolds won the long course at the 10Peaks race in 2018, finishing the 73-kilometre course, with 5,000-metres of ascent, through the Lake District in 11 hours and 46 minutes. He is also a two time-finisher (2017 and 2018) of the 330-kilometre Tor des Geants in the Italian Alps. Another dark horse to watch out for could be Konrad Rawlik, husband to renowned fell and ultra-runner Jasmin Paris. They both competed in the 2015 race with Jasmin finishing first woman and second overall – beating her husband by six minutes as he finished third overall.

Other participants to follow through the Welsh mountains include Virgin Radio presenter Vassos Alexander, who will be back for his second attempt at the Berghaus Dragon’s Back Race® after having dropped out on day three in 2017. An experienced road marathon and ultra-runner, Vassos has trained hard for his second attempt to claim a Dragon.

Joe Faulkner will be aiming to complete a record breaking fifth race after having successfully completed the original edition of the race in 1992 and every edition since, in 2012, 2015, and 2017. Joe has a very long history of off-road running, adventure racing and mountain skills training, and his experience and aptitude is hugely respected in outdoor circles.

Tom Withers is also back for more after finishing in last place in the 2017 race, 42 hours behind the winner Marcus Scotney, in a time of 80 hours 17 minutes. He received the biggest Dragon trophy of all for being last over the line and spending the most time out on the course. Will it be him again or will someone else be the recipient of this special prize?

The entry list for the Berghaus Dragon’s Back Race® shows a fantastic diversity of experiences and backgrounds with 32 nationalities represented and many names who are unknown to the race organisers. At this point, it is still very difficult to predict confidently who will be the podium contenders. The first day’s route through the rugged and gnarly terrain of northern Snowdonia will certainly be a baptism of fire for many participants no matter their experience.

More About Berghaus Dragon's Back Race®

252 Km Run And A Minute Apart
Four days into the 2019 Berghaus Dragon’s Back Race and after 252km of challenging mountain running, only a minute separates the top

Reynolds and Verjee Hold Leads With 2 Days To Go
There was a big queue of runners ready to set off at 6:00am on day three of the Berghaus Dragon’s Back Race. Statistically,

Cut and Thrust While Racing The Dragon
After the drama of Crib Goch and Snowdon on Monday, day two of the 2019 Berghaus Dragon’s Back Race saw competitors heading into the

The Dragon Bites On Day One
The start of day one of the 2019 Berghaus Dragon’s Back Race showcased how much the event has grown. Not only was the courtyard

Dragon's Back Race Sets Off
The world’s toughest five-day mountain race started this morning at Conwy Castle in North Wales.  At 7:00am, 404 competitors