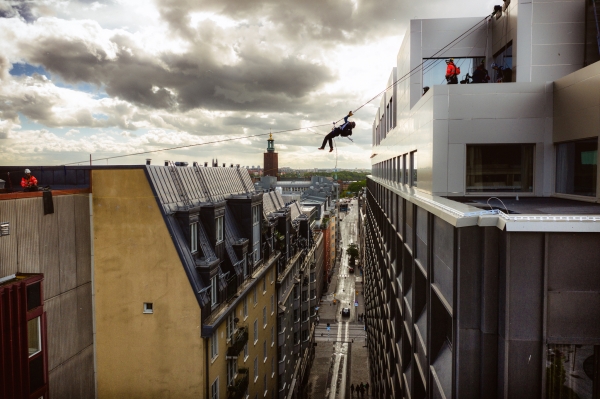 Over the weekend of May 24.-26, 16 teams took part in the Nordic Islands Adventure Race called "Ragnarök" as part of the European Adventure Racing Series. With start in Östhammar and finish line in Stockholm, athletes had to conquer a total of 284km only by running, mountain biking, kayaking and swimrunning while navigating with map and compass the whole time. Moreover, along the way they had to cross several technical rope sections including a 150m rope traverse over an opencast mine in Dannemora or a 20 meter traverse between buildings in the very centre of Stockholm city.

The finish line was as breathtaking as the race itself, placed on the roof of Downtown Camper hotel with a 360 degree view of Stockholm. Competitors arrived to the finish line via a rope traverse from a building across the street - it was really a spectacular sight that left passing pedestrians in awe.

The race started on Friday, May 24, in Östhammar and this usually quiet town suddenly turned into a stage for these great endurance athletes. With the race director behind the grill, competitors enjoyed a barbecue dinner just in time for the start signal at 22:00. After a short foot orienteering in the village, they headed south into the night and onto the 50km trekking stage. At the end of it, teams arrived to Dannemora where a total of three challenges awaited them: a 72 meter rappel, then a 150 meter rope traverse over an opencast mine and finally an 8km bike ride underground through series of tunnels, getting as low as 260 meters under the surface.

From Dannemora teams were on the 157km mountain bike stage heading south through Uppsala towards Tammsvik. Despite being on bikes, their progress was quite slow as the main roads are a no-go in adventure racing. Instead they had to find their way through a maze of paths, through dense forests, uncut fields and sometimes even through swamps. No wonder it took teams between 12 and 20 hours to finish this stage!

When they arrived to Tammsvik, they swiftly packed up their bikes and switched to kayaks. After so many hours in the saddle - kayaks were definitely a welcomed relief!  This stage however wasn't a walk in the park either - it was 52km long with a 1km portage where teams had to carry their kayaks across land.

Finally, they reached Stockholm and the last stage - swimrun. This rapidly growing sport was introduced to adventure racing as a standalone discipline last year on Åland during the Nordic Islands Adventure Race 2018 from Stockholm to Turku, Finland. This time however, it was a fully urban swimrun through the very heart of Stockholm. Interestingly, competitors were at the final stage during Sunday and so the city centre was full of pedestrians that couldn't believe their eyes when they saw teams in wetsuits running around busy streets.

This 15 km stage was ended by the rope traverse and then it was all about champagne, smiles and tears of joy at the finish line.  This epic weekend adventure was wrapped up by the prize ceremony that was broadcast live to fans around the world.

Later this year, from July 11-2, the Nordic Islands Adventure Race called "Valhalla" will take its competitors from Åre, Sweden to Ålesund in Norway. This race will be part of the Adventure Racing World Series and it will certainly live up to expectations as its 700km epic course will take competitors (read: 'Vikings') over the Scandinavian mountain ranges to the renowned Norwegian fjords. This will be a tough adventure so if you are up for the challenge sign up now at www.niargames.com

Getting Ready for Ragnarok
During this weekend, May 24.-26., Nordic Islands Adventure Race called "Ragnarök" will take place around the Swedish capital