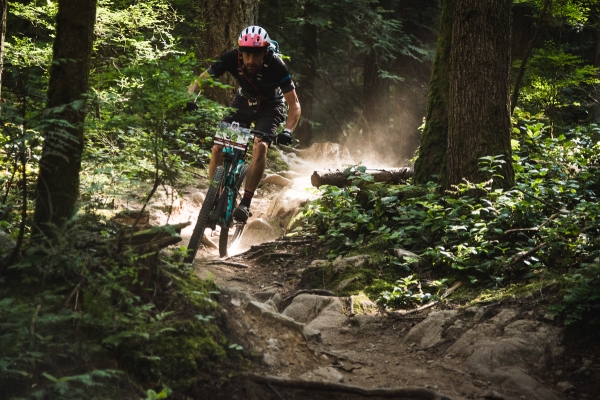 BC Bike Race 2019 is “Ready to Rumble” for its 13th Lucky Year.  It's dubbed the ‘Ultimate Singletrack Experience’ for good reason and the countdown is on to see who will reign supreme in this epic test of technical riding and monster endurance on British Columbia’s legendary gnarly terrain.

Over the course of seven singletrack-rich days, 600 Racers from 38 countries will hit the trails to whoop and holler, grunt and grind and ultimately strap the coveted BCBR belt buckle to their waists.

This race is for a different sort of rider, someone like Katarina Nash (Team Clif Bar) or Geoff Kabush (Team Yeti-Maxxis,) the reigning champions who are returning this year to reassert their dominance.  It’s for someone who rides burly singletrack at the speed of light and keeps the pressure on day after day until the job is done.

The big question is, does anyone have the chops to endure the heat that Kabush dishes out, or the terrain that packs a resounding wallop, and displace the BCBR champ from the top men's podium spot.  2018 saw an aggressive charge by EWS racer Francois Bailly-Maitre (FRA,) 2015 was won by American Tristan Uhl and the inaugural race in 2007 was captured by 24-hour legend Chris Eatough (USA.)  However, in the dozen incarnations of the race, it’s been dominated in the men’s field, by Canucks.

“I love riding singletrack, but trying to race it, with these guys, whoosh that’s another thing” said Karl Platt, 5x Cape Epic, 5x Trans Alp winner, who went on to win stage 3 in Powell River and place 6th in the overall 2018 event.

On the women’s side Katarina Nash (Team Clif Bar) has been crushing both women and men as she sees how far up the overall standings her super powered Olympic, World Cup legs can take her.  Blistering fast in the singletrack, cool under fire, this champion has only been challenged in the last 4 attempts by her teammate Maghalee Rochee (Team Clif Bar) in 2017.

However Nash has her hands full this year. The list of challengers to the top women's podium step for 2019 is deep. Riders like Kaysee Armstong (Team Liv Giant), who claimed 2nd at the 2018 edition, and Emile Shields (Team ADF), are both back with more BCBR experience and hoping  to dethrone Queen Nash. There are other riders in the mix racing BC Bike Race for the fist time that will keep the action interesting.

Serena Bishop Gordon (Team Liv Giant) is a seasoned professional XC mountain biker and cyclocross racer, she has plenty of experience in stage and marathon racing including a 3rd place at the Breck Epic.

Courtenay McFadden (Team Pivot-Maxxis) is a member of the US cyclocross team and with a solid 4th place at Nationals, it will be great to see her mixing it up in the hunt for podium spots.

Jenna Greaser (Rocky Mountain) an all arounder mountain bike and cyclocross racer, and has dabbled with some good success in Enduro. She is originally from Connecticut but now resides in Fernie, BC and has her goals set high.

Geoff Kabush’s closest competition will mostly likely come from last year’s 3rd place finisher, Kerri Warner (Team Kona-Maxxis-Shimano), who will bring both experience and un-fettered ambition to the start line. Other top level racers, but without previous BCBR experience will also be in the mix to keep the action interesting.

Payson McElveen (Team Orange Seal – Trek) is the 2017 US Marathon Champion and winner of the Mongolia Bike Challenge.

Micheal Vandenham (Garneau – Easton Cycling) is the Canadian Cyclo-Cross national champion and all around shredder who will take his experience from the cross arena over to mountain biking where he’s already starting to make waves.

Felix Burke (Rocky Mountain) is new to the BC Bike Race this year. Young and already an accomplished racer, he will put his mad technical skills and ambitions to the test against a stacked field of top pro’s and experienced riders.

Other Categories, Characters and Stories:

Sam Schultz (Rocky Mountain):  is a perennial fan-favourite and US Olympian, he returns to shred BC singletrack with his best in class moustache and baggies. With a respectable 7th place at BCBR in 2018, Sam's playful style puts the fun into the front pack, throwing the bike sideways as he vies for stage wins and podiums.

Mixed Teams remain an important part of the Mountain Bike Stage race tradition. Staying together through the relentless singletrack of BC Bike Race is like any relationship - it takes work. However, many teams of two come for different reason all together. Some are couples on the trail and in life. Others might be a mother- daughter combo looking to bond, or simply some old friends who want to share an exceptional experience together.

Laeita Roux is a World Champion in Ski Mountaineering aka Skimo, and will team up with Cornelia Hug for an unforgettable experience hoping to build on their success at the Four Islands Race in Croatia and the Cape Epic.

Kelsey Serwa, a 3x Canadian Winter Olympian with a Gold and Silver Medal in Skier-Cross (Pyeongchang, Sochi) will be riding her very first BC Bike Race, rubbing shoulders with all participants and sharing her passion for sports.

Graham Fitch started his journey with the BC Bike Race 13 years ago with friend and co-founder Greg McDougal of Harbour Air -the founding sponsor of BC Bike Race. He hasn’t missed a single stage yet. At 60 years young this local Whistler resident will return to complete another edition and maintain the longest standing track record of completions.

Jez Scarrat debuted in the original BCBR feature length film, SEVEN, and is an inspiration to us all completing the arduous journey with a prosthetic lower limb. He returns this year with a few other UK Veterans to share his experience and once again show the world that anything is possible if you put your mind to it.