Off With A Bang At Dunrobin Castle 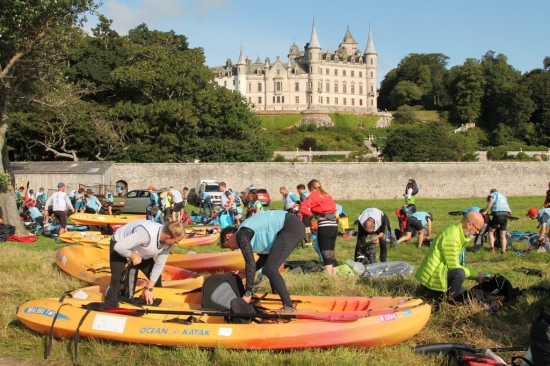 With a blast from a shotgun ITERA started at 08.30 this morning in front of the baroque turrets of Dunrobin Castle, seat of the Duke of Sutherland. The gun was fired by the castle manager Scott Morrison and before setting the teams off he wished them all well for their amazing journey and said, “It’s ‘the Glorious 12th’ today , start of the grouse shooting season, so I hope this is the only gun you hear on your travels!”

It was a glorious setting in front of the Castle too, which has 189 rooms and is the most northerly in Scotland – it even has its own railway station!  Brian Gatens of the NYARA team said, “This has to be the best race start I’ve been to.”  (The castle starts are something of an ITERA tradition and the last time the race was in Scotland it began at Stirling Castle.)

Course planner Tom Gibbs lead the teams up the long drive and across the road, before they were allowed to let all those pent up competitive juices loose and race away on a 5k trail into the woods and back down to the coast along a valley of pools and waterfalls within the grounds. Then they ran back along the coast to the foot of castle, where the view of it was even more amazing, before setting off to paddle down the coastline towards Tain and the first checkpoint.

After a dreich day yesterday (look it up) the weather for the start was perfect, calm with high cloud and there was even some sunshine breaking through as the teams sorted out their paddle gear on the grass below the castle.

First back were the South African team, Adventure Life, and soon the grass was covered in gear bags, seats and paddles.  There was a handy ramp down onto the beach for the teams to get away on their 20km paddle down the coast, past Dornoch, to reach the Glenmorangie Distillery at Tain.  (It was a great sight to see the boats setting off, but there won’t be drone shots on the video ... the drones frighten the castles falcons!)

Tidal conditions were near perfect too with the teams setting off on a rising tide close to high water and they will be grateful for the calm conditions – and for a picture perfect start to the race.

Notes To Assist Rehabilitation Of Multi-Day Adventure Racers
Now that you’ve survived several days racing in the wilderness, these handy tips from Eddie Winthorpe of the Nav4-JRP Team may

SWECO Take Second as ITERA Wraps Up
Through day 5 of ITERA teams were arriving in Inverness city centre, riding in past the castle to the finish line in the plaza outside the

Lozere Team2raid Take The Win At ITERA
On the final morning of ITERA, and going into the fifth day, three teams were still on the full course for the race.  SWECO had lead

From Glen Garry to The Great Glen
Teams at ITERA were paddling and rafting down Glen Garry on the afternoon and evening of day 4 of the race.  The race had adapted the

Out to Applecross
The full course teams in ITERA, and those short course teams who had the energy, followed the route out to the remote village of Applecross

At Kinlochewe
Teams are descending from their Fisherfield traverse into the village of Kinlochewe to the transition in the village hall, which is packed

Hit by a Headwind
Last night’s course change and today’s headwind have hit the teams and the race organisation hard, and it’s been a tough

Oh la la! Portage!
Stage 4 of ITERA is proving to be a huge test of endurance for the teams and some of the French teams I met portaging their kayaks along

Elphin Safety Check Means a Course Change
Teams finished their coast to coast ride near Ledmore Junction in a small village hall at Elphin, although there did not seem to be a

Horrible History in Strath Rory
Scotland does history very well, it has lots of it, in all varieties, and on the first day of the race teams have been passing through

The Rush For The School Gates As ITERA Gets Ready To Go
The Milburn Academy was a hive of activity today as teams made final preparations for the race, and they were on deadline.  The school

Two New (ish) Teams For ITERA
Adventure racing teams are more flexible than most sports teams, and two teams at ITERA have brought together racers who didn’t

The ITERA Course Is Revealed!
The curtain slowly rose before the expectant teams at the ITERA Expedition Race briefing, and the race route was revealed.  A huge

ITERA Attracts An International Entry To The Scottish Highlands
Organising and marketing an expedition adventure race requires imagination and skill, a willingness to take risks, and faith in your