Aussies With The Early Advantage After Pioneer Prologue 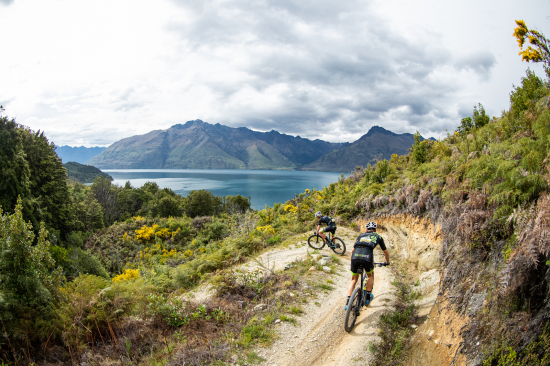 It seemed appropriate that it was the Aussies taking out the honours in the prologue at the 2019 Pioneer, fuelled by Nutri-Grain, given the Lake was named in 1862 by Australian gold digger George Moonlight in honour of his donkey, with Moke an old name for a donkey. But that is where the comparison ends with Brendan Johnston and Jon Odams (Giant Australia Off-Road Team) anything but donkey-like in the manner of their stage win in the open men’s category.

With riders starting at 25 second intervals, Johnston and Odams went red-line in the opening few kilometres to get on the wheel of defending champions Michael Vink and Tim Rush (Onya Bike North Otago) and from there essentially covered their every move to win the 26km prologue by 18 seconds from fellow Australians Garry Milburn and Christopher Aitken (MAAP Shimano) with Vink and Rush in third.

“That was our plan, 25 seconds is not that long so we bridged that early on in the descent but they were hard to shake in the rest of the stage, they were pretty strong on the little pinches and it was a case of bridging back on and then we rode together into the finish, but that was the plan so we are happy. We had to focus on riding our own time trial and not get caught up with them, but they are clearly the favourites.”

Odams was content also with their days work, knowing that there are much longer and demanding stages to come in the six-day mountain bike stage race.

“I think we rode well and within ourselves. At the start I was looking at the time gaps and we caught them pretty quick on one of the open rocky descents and worked on trying to get away on the single track but it was too tight, you can’t really get away on those sections. We then paced it up the final climb to the finish, that was a good day.”

Olympic triathlete Ryan Sissons and XTERRA specialist Sam Osborne (Winger Hamilton) showed they will be contenders this week, finishing in fourth place just over a minute down on the stage winners, despite Osborne crashing and having to straighten his handlebars before remounting.

“We are happy with that if we are only about a minute down, that is probably about the time we lost so that gives us a good guideline as to the pace required to be in amongst it,” said Osborne, who finished fourth at the XTERRA World Championship this year. “I went down pretty hard I guess and had to straighten the bars and get back on but overall we are happy to be underway.”

Sissons loved his first hit-out on The Pioneer, with the triathlete enjoying the challenge of the largely single-track prologue on the out and back course to Moke Lake.

“I really enjoyed that and managed to maintain a good flow throughout the course. The downhill section rolled nicely, and we found a nice tempo on the climb back. It is just a stunning location though and great place to come and ride, on another day I might have enjoyed the view a bit more, but you have to love riding here, what a great combination of trails to get us underway.”

The open women’s category was taken out by defending champions Kate McIlroy and Amy Hollamby (Stonewood Homes – Wellington/Timaru), the pair in dominant fashion as they cut out the 26km down and up circuit at Moke Lake in 1:25:16, establishing an impressive 6:54 lead over 2017 winners Nina McVicar and Reta Trotman (New World St Martins – Dunedin/Christchurch).

The mixed category is tipped as the one to watch this week, with a great battle looming at the front of the field amongst quality New Zealand and Australian combinations, and so it proved. 2016 and 2017 champions Kate Fluker and Mark Williams (New World/Pivot - Queenstown) edged the stage by just 2.4 seconds from defending champions Jo Skerman and Josie Wilcox (JoJo – Bulls/Palmerston North), with Aussie brother/sister pairing of Holly and Michael Harris (SRAM MTOSS - Australia) 1:37 back in third place.

Fluker knew it was close and spoke of how knowing the trails is not always a clear advantage.

“It was almost a tie; we rode most of the way together and had a good time. It is always different racing home trails, you have to race them harder than we would normally, and we almost got caught out on a few of the corners, but that was fun.”

Peg Leyland and Kath Kelly (Earnscleugh Express – Wellington/Dunedin) will be the team to beat in the women’s masters (40+) category, the 2018 champions won the opening prologue in a time of 1:35:29, establishing an early advantage of just over nine minutes over the Outlaw Sisters Jackie Blay and Sara Prince (NZL).

Team Off the Chain Gene Marsh and Jeremy Forlong took line honours in the men’s masters, establishing a lead of 1:17 over Anthony Chapman and Andy Hagan (Optimal Performance, NZL).

Leading the grand masters (50+) after the prologue is TerreActive IT Security team of Marc Baechli and Daniel Christen (NZL) but with just over five minutes separating the top four teams, this will be a fiercely competitive category.

Conditions were near perfect first thing this morning, with overcast skies and a moderate temperature making for a comfortable start to the day. The weather deteriorated however, with a steady but light rain settling in for the final few riders on course, but did not cause any great discomfort.

Competitors in The Pioneer, fuelled by Nutri-Grain, range in age from 19 to 72 (average age 44) and represent 24 countries, with Australia the largest contingent outside of New Zealand (211) with 57 riders making the trip across the Tasman. South Africa, home to the pinnacle event in the EPIC Series the Absa Cape Epic, has 24 riders, America 12 and Spain 11 while one of the more fascinating stats is the seven riders registered from Iceland.

Riders now rest up tonight at the event village alongside Moke Lake ahead of tomorrow’s 76 km stage into Arrowtown, with the village and tent city relocating to Alexandra and then Bannockburn for two nights at each location. Riders then head back to Frankton on Friday December 6, with the final stage taking them to the finish line village on the ridge off Hawthorn Drive, overlooking the Kawarau River and the Remarkables.

The Pioneer, fuelled by Nutri-Grain

More About The Pioneer

Defending Champions Reign Supreme At 2019 Pioneer
It was multiple back to back success stories at The Pioneer, fuelled by Nutri-Grain, with Michal Vink and Tim Rush (Onya Bike North Otago),

Snow And High Winds Force Course Change At Pioneer
Race organisers were kept on their toes as two course changes were made this morning as riders headed out on stage four of The Pioneer,

Kiwis Revel In The Wet and Cold Ride to Bannockburn
Riders overcame the worst the weather could throw at them on stage three of The Pioneer, fuelled by Nutri-Grain, as constant rain and cool

Defending Champions Make A Statement on Stage One
Defending champions Michael Vink and Tim Rush (Onya Bike North Otago) made an emphatic statement on day two of The Pioneer, fuelled by

World Class Aussies Threaten Kiwi Dominance At 2019 Pioneer
Australian riders will be out in force at the 2019 Pioneer, fuelled by Nutri-Grain, and they mean business with some of their best

Epic New Zealand Mountain Bike Event On The Move
The Pioneer Mountain Bike Stage Race is on the move, with organisers confirming the event will further evolve with a shift to the North

Nutri-Grain Partners With Epic Series Mountain Bike Race
The 2019 Pioneer has a new name, with today’s announcement of Nutri-Grain as naming rights partner to the event, the iconic Central