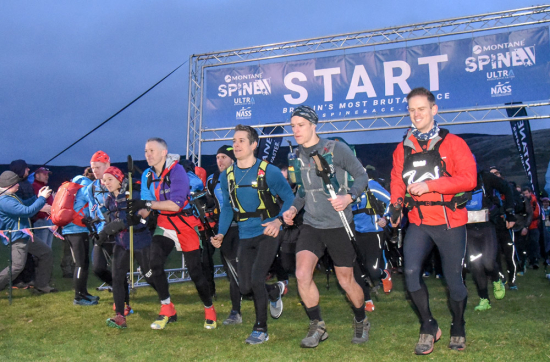 98 Competitors (78 men and 20 women) from 10 different nations are competing to cover 108 miles of the Pennine Way National Trail irrespective of what the terrain and the British weather can throw at them.

Yesterday, Race Director Phil Hayday Brown described this year’s Challenger as ‘anyone’s race’.  The strongest runners have shown their mettle against gusts between 60-80mph today and a possible podium is starting to materialise.

Dougie Zinis (GBR) currently holds the lead.  Dougie completed a Bob Graham round in the summer and is no stranger to long days in the hills.  He narrowly leads Richard Curtis (USA) who was leader himself until reaching CP1 at Hebden Bridge.  In 3rd currently is Steve Turland (GBR), another Bob Graham finisher.

First woman is Elaine Bisson (GBR).  Elaine has a strong pedigree at this distance having successfully raced the Montane Lakeland 100 previously and is widening her lead over fellow brits Sarah Witte and Rebecca Lane.

The Spine® Mountain Rescue Team (MRT) Challenge, which is on the same course as the Spine® Challenger but only open to active Mountain Rescue personnel from England, Wales and the Scottish Borders, started at 9 AM.

At the front of that race, Alastair Hubbard of Braemar Mountain Rescue, has overtaken all but 11 of the MONTANE Spine Challenger runners, despite them setting out an hour ahead of him this morning.

Back in Edale, the MONTANE Spine® Racers have spent the day registering for tomorrow's 268 mile event.  It’s a stellar field in this year’s race with a number of runners as possible favourites.

Eugenie Rosello Sole (ESP), winner in 2013, is looking to dispel memories of the heartbreak of 2019 when he was withdrawn only 6km from the finish line whilst in 2nd position.  Jasmin Paris stole the headlines last year with her course record breaking win, but behind the scenes there are plenty who remember the heartbreak of Eugenie’s DNF and feel this could be his year.

Winner of the 2019 Montane Spine Fusion race (the same course but in summer), Sabrina Verjee (GBR) is looking for a second win on the Pennine Way.  When asked what her targets for this race were, Sabrina said; “it’s a really strong field this year so finishing is goal number one.  Beyond that, a sub 100hr time would be great.”

“It’ll be wet, it’ll be dark and it’ll be quite the adventure”, said John Kelly (USA) about his expectations of the race.  Having been the winner (and sole finisher) of the notorious Barkley Marathons in 2017, an experience he says he’ll be drawing on over the coming days, there’s a lot of eyes on this runner.  “I’m just going to run my own race and not worry too much about the others”, said John when asked about the strength of the field he’s taking on.

Team GB 24hr runner and former Montane Lakeland 100 winner Debbie Martin-Consani says the Spine Race has always been on her radar, “I would always end up spending Spine week watching the dots on the tracker like everyone else” she said of the event, adding “I don’t have a set target in mind.  That’ll come later on Tuesday or Wednesday, but I’ll be looking to finish as quickly as I can.”

Other runners to look out for, include Tom Hollins (GBR) who took the title in 2017, and 2016 winner Eoin Keith (IRL) who’s course record Jasmin Paris broke last year.  Elsewhere, Wouter Huitzing (NED) is making the step up to the full race after winning the Montane Spine Challenger in 2018 and placing 2nd last year and will be hoping to follow in Tom Hollin’s footsteps after he famously won the Spine Challenger in 2016 and went on to win the full race the following year.

Sabrina Verjee (GBR) Finishes As First Woman In The Montane ...
Sabrina Verjee has arrived in Kirk Yetholm and secured her place as 1st woman in the 2020 Montane Spine Race.  This follows her

Kelly Sets A Blistering Pace
“I’m just going to run my own race and not worry about the others” said John Kelly (USA) just before the race.  It