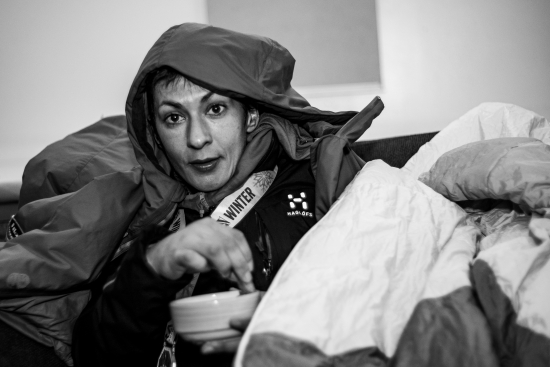 Sabrina Verjee has arrived in Kirk Yetholm and secured her place as 1st woman in the 2020 Montane Spine Race.  This follows her overall win in the Montane Spine Fusion race in June 2019, the summer edition of the Spine which follows the same 268-mile course.

Sabrina has had to push on through Storm Brendan, and the windy and rainy days since, where wind speeds have reached up to 80mph on high ground.  Nevertheless, Sabrina has held her position as first woman since leaving Edale and, despite creating an unassailable gap between herself and the women behind her, she has never stopped pushing as hard as she could.

When asked about her favourite part of the course she answered ‘The Cheviots’ without hesitation before adding, “but it’s always windy somehow.  Has anybody ever been up there without getting blown around?”

“Last year I was first of my gender”, said Eoin Keith as he crossed a finish line he is very familiar with, “this year I’m claiming first non-superhero”.  Eoin arrived in high spirits as he grabbed 2nd place on the Montane Spine Race for the 2nd year in a row.  The 2020 Race Winner, John Kelly presented Eoin with his medal at the Border Hotel, the official end point of the Pennine Way.

At around 16:00, Wouter Huitzing (NED) and Simon Gfeller (SUI) crossed the line together, paused and placed their hands on the wall of the Border Hotel in unison bagging them joint 3rd positon.  Huitzing, who has completed the Challenger three times including a win, a podium and a course record, was stepping up to the full distance for the first time and arrived at CP5 in Bellingham yesterday at around the same time as Simon Gfeller, who was 2nd in the Spine Race in 2018.  The two made a decision then to stay together through the treacherous Cheviot Hills and to cross the line together as well.

At midnight last night, John Kelly won the 2020 edition of the Montane Spine Race, setting a new men’s course record as he did so.  “Everything hurts” Kelly said when asked if he had anything to say about his win, whilst sitting in a large plant pot outside the Border Inn, “My body shut down at the final hut.  I wanted to push past it and finish, but I was cold and didn’t want to risk it after what happened to Eugenie last year. But then I warmed up and I wasn’t numb anymore.”

Throughout this race he has been focussed, efficient and shown an ability to take environmental extremes in his stride as he led the pack from the start in Edale to the finish in Kirk Yetholm.

Further down the course, the race goes on until Sunday.  At the time of writing there are 70 runners still on the course with 77 having retired.  The finish line is still a long way away and the remaining runners are enduring wind speeds on high ground that leave them navigating through the night on their hands and knees.

Kelly Sets A Blistering Pace
“I’m just going to run my own race and not worry about the others” said John Kelly (USA) just before the race.  It

The Montane Spine Challenger Kicks Off A Series Of ...
98 Competitors (78 men and 20 women) from 10 different nations are competing to cover 108 miles of the Pennine Way National Trail