We didn’t come there for the trophy. We came there for the fight.  As the youngest team at the start list (2x20, 23 and 35), before the start we would have taken 5th place without hesitation - but later on our power surprised even ourselves.

As we have three strong orienteers in our team, the orienteering run at the beginning of the race was perfect for us. Our plan was to gain some advantage over the main bunch and hold it till the CP in the cave to avoid the queue there. It went quite well, and Jan jumped in and out almost immediately after we got there.

The first MTB stage was quite demanding, we felt like the total elevation gain was greater than we were told.  Some route choice decisions were splendid, some worse, also one front flip on a downhill occurred.  We hoped to finish the canoe stage before dusk, but when we got to TA2, we already knew it wouldn't be possible.

Phew, that stage was so long! That day we have probably spent more time paddling than in the whole last month. We span in circles, wandered around the shore in search of a way down the dams and investigated riverside bushes.  The water level was low, so in many places the fastest way to move was to get out and push the canoe.  Hence, coupling with our mates from the Poco Loco Team was both stressing and pleasing.  As it turned out later, our bond has just begun. 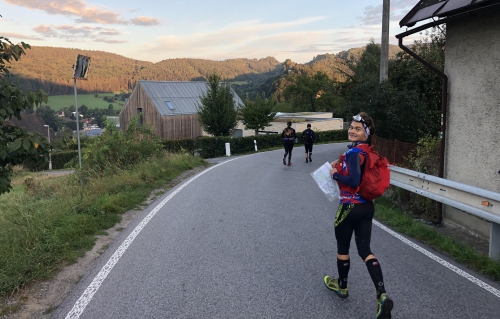 Finally onshore, a small campfire we found there not only cured our morale but also saved us from pneumonia.  Having dried out, still chilled, we started a long march.  We ate a lot, did warm up sprints and overall the trek was quite nice.  Although there was neither navigation, nor landscape views, surprisingly the sleepmonsters also didn’t appear.  Five hours after departure, at the horizon we saw not only the sun, but also the Poco Loco Team – better than espresso.

After 5 loafs, a pack of sausages and 10 cans of coke in TA2 we woke up somewhere in the middle of a rock wall.  There you could get to know Iza at her second in life rock climbing.  As you can see on the video on FB, her adrenaline was up.  Talking about reaching tops – the highest peak on the course was here waiting for us.  A long climb turned out to be just a prelude for the hardest bike stage of the race.  Sleepiness attacked, navigation skills let us down, the chosen track was unrideable, and meeting more and more fellow teams was slowly destroying us.  Frustrated, we walked down an almost vertical hill over the burnout field to reach the next transition area.

Unfortunately, the author of this text can’t say a lot about the short trek that followed.  The ability to walk and sleep simultaneously was tested and I succeeded.  The rest of the team also wasn’t too fresh and behaved quite unpredictably, suddenly running downhill with shouts of joy.  The pace was slow, but Jarek’s navigation pushed us further on.

The next bike stage started with a wake up uphill, a chilling downhill and a much needed stop at a shop.  After a quick recovery and changing the route for one a bit less demanding, we took the road which was busy with the speeding trains of other teams, that we were unable to keep up with them.

The night that came was bright with a thunderstorm.  With lightning came heavy rain, so the best decision we could make was to take an hour of sleep at a bus stop. After the canoe section the previous night I thought it couldn't be colder, but I was wrong. We slept quite well, but after an hour the NRC foil was wet from the inside (the water which condensed from our wet clothes and body), so it was cold again. So cold that Iza was shouting to her legs to stop shaking NOW. But they wouldn't listen. We had to start pedalling to warm our bodies up. That rain was a turning point in the race and our most difficult moment.  We knew that TA1 (with dry clothes and hot soup) was 2 hours away.  But it was to be two hours in the rain with wet clothes on, and we would be freezing on the downhills.  We were mentally strong, and we got through this, and we are sure it was a strong point in achieving our quite satisfying result.

In our sweet, awaited hut we just threw the wet stuff off and went for a pleasant night walk through the rocky forest, without hurry.  The next transition took us no more than an hour. We didn’t sleep in TA1 before the last stage and that probably was the base of our success.

Departing for the last long bike, still before the sunrise, Jan and Jarek changed navigation responsibilities from one to another at every single point.  Once we have taken maybe a worse route, just not by much.  Soon our luck ended and a fountain of white milk burst from Jarek’s tire. Changing a tube took us enough time to meet with the team that at the finish line was only 10 minutes before us. Since then any caffeine supplements were no longer needed, adrenaline and the smell of champagne on the finish line made us forgot about fatigue or pain. Constantly imagining other teams before and after us, we rushed over the mountains with madness.

Finally on the finish line we were stunned by our performance – we were sure we were fighting for a place in the top ten. Getting to know what really happened during the race only boosted our pride, but also revealed mistakes we could have avoided.

We’d like to thank the organisers for the astonishing adventure and hope they do not lose motivation to create this beautiful race in the centre of Europe. We believe the Czech Adventure Race is a gateway for us, youngsters, to the world of professional Adventure Races.

A “Spontaneous” And An Adventurous Race. The Dutch Adventure Racing Team Explore in Czechia

The Czech Adventure Race Gets Ready To Go