A perfect day set the stage for a very tough race for the front of the pack. This third and COVID - modified edition of ÖTILLÖ Swimrun Cannes saw the young French team - Hugo Tormento & Matthieu Poullain, racing as Team ARK Swimrun (FRA) manage to pull away from Team Salming (SWE) to take the win. The time difference at the finish was a little more than 5 minutes after more than 44 km of hard racing. 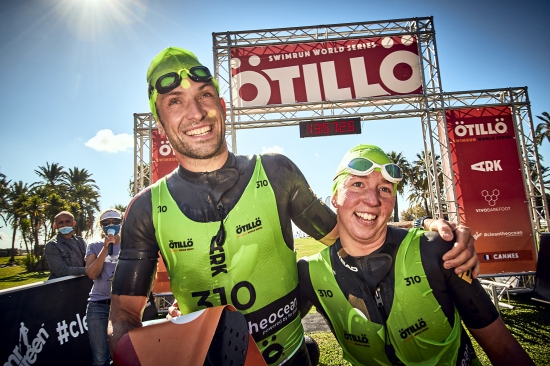 The Race in Detail

""We pushed hard from the beginning and managed to hold on to the lead the whole way on this very challenging course. " said the thrilled winners Hugo Tormento & Matthieu Poullain, Team ARK Swimrun (FRA) after finishing as overall winners in 4:43:09.

The ÖTILLÖ Swimrun Cannes World Series course was 44 km long of which 35.5 km were running and 8.5 km were swimming.  The course started in the medieval fort on the Sainte Marguerite Island and then took the racers to the monastery island of Saint Honorat before returning to Sainte Marguerite. Then a big swim back to the mainland followed.

There the course took the racers along La Croisette, up the big hill to La Croix des Gardes before turning back down through the Suquet and the Croisette again. From there the teams went up the brutal train track to the top of La Californie before finishing down in town again. In total the course comprised eleven runs and ten swims.

The weather was fantastic all weekend with barely any wind, almost 20 degrees in the water and almost the same in the air.

Several teams had to struggle to make it in time for the three cut-offs. Some had to abandon along the way. The top teams pushed each other hard, chasing each other in a tight group in the first two hours before the pace took its toll.

At all ÖTILLÖ swimrun World Series events teams race in pairs. Using each other’s strengths will push boundaries. The team experience is incomparable and is part of why swimrun is growing so fast in popularity.

85 teams of two representing 16 nations were registered to compete in the ÖTILLÖ World Series Cannes, the second qualifier of the year for ÖTILLÖ, The Swimrun World Championship 2021 in the Swedish archipelago.

The day prior to the race two shorter, more accessible races were organised, the ÖTILLÖ Sprint and ÖTILLÖ Experience, offering the same flavours as the longer, more challenging races, but in a smaller format.

Six top teams at ÖTILLÖ Cannes qualify to ÖTILLÖ, The Swimrun World Championship 2021 on September 6th, 2021 in the Stockholm Archipelago; the top 2 men, top 2 mixed and the top 2 women.