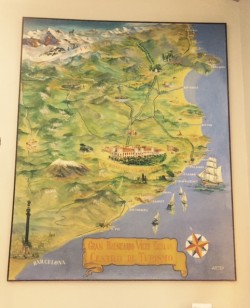 The 2017 edition of the Aventura X-perience will begin on Friday, October 13 at 22:00. Surely an adventure race that begins on Friday the 13th is a good omen. As the race is taking place in the Catalonia region of Spain, in the weeks leading up to the race adventure racers who have travelled from around Europe to participate have been anxiously scanning the headlines for good signs. The recent political unrest due to the Catalonian independence referendum was in the forefront of everyone’s mind as they arrived to the race start.

The race start is in the town of Caldes de Malavella on the Northeast coast of Catalonia Spain. With a population of 7,130, Caldes de Malavella is stepped in history with ruins in the town center dating back to 50 AD. As well, there are the remains of Roman thermal baths and the influence of the Moors is evident in the architecture. The town also produces the famous sparkling mineral water, Vichy Catalan.

Carles Domingo Dilmer, the race director, explained that he and his team have been organizing the race for six years using a one day format but 2017 is the first time that they will be doing a longer one (maximum race time this year is 38 hours).

There will be ten sections in the race and they are as follows:

The expedition race will begin with a prologue at 17:00 from the Sant Esteve church square. There will be 4 CPs that must be collected in score order; each of the 4 CPs is located exactly 2.5 kms from at starting line. At each CP there will be a designated activity that 1 racer from each team must complete to validate the CP and they will have only one chance to do so. The racers won’t find out what the activity is until they reach the CP but SleepMonsters knows and is looking forward to some great photo opportunities!

The prologue will determine the time each team starts the actual race at 22:00.

The race briefing will take place tomorrow at 12:00 in the Plaza de le Iglesis de Sant Esteve and teams will be given maps for sections 1-5. Judging by a fly over of the sections on Google Earth, the terrain looks technical and challenging.

Race director Carles Domingo Dilmer said that the aim of the organizing team is to show case the variety of the terrain; the highest CP is at 1,000m altitude and racers will also be collecting CPs at sea level.

As we spoke, I glanced down at Carles’s shins and they were a lattice of angry red scratches. He explained that they were the result of him placing certain CPs and he laughed and added, “I was setting them out in the day, the vegetation is so thick out there that if you do not chose the correct line, you will come to an impasse and teams doing it in the dark will have a real adventure.”

Race photographer Raul Comino chimed in at this point and said, “Yeah, Carles is known for his complicated CP placement, he doesn’t put them just on the side of the road.” And Carles chuckled and said, “Yeah, that’s for triathletes!”

There will be 21 teams racing with teams from France, Denmark, the Czech Republic as well as Catalonian and Spanish teams. Teams are composed of 3 members and the first strategic choice was the composition; mixed or single sex. There is will be only one podium but teams racing with a woman will automatically receive a 4% bonus of their racing time.

There are some well-known names on the roster as several top performing European teams are here.In fact, this is one of the first major races since the ARWC in Wyoming USA back in August.

Team X is what the Danish trio Johan Nielsen, Anna Movin and Thomas Guldmann as currently using as their team name. They very kindly ferried this SM reporter from the Barcelona airport to the race start yesterday and during the drive they explained that because they each usually race with other teams, they weren’t sure what name to list and added that they needed to think up one in a hurry. Over dinner as we were toasting it was suggested that “Skol” might be a possibility but that was quickly squashed as not serious enough for their goals on this race.

In view of the technicality of the course, the terrain, the level of competition and the skills of the organizing team, Friday the 13th and the start of the 2017 Aventura X-perience race is most auspicious. Stay tuned...