Fun And Games In The Prologue 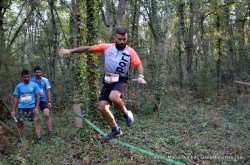 The race briefing for the Aventura X-perience race was held at 12:00 in the Vichy Catalan spa located in the historical center of Caldes de Malavella. After a brief speech from the mayor, the race director Carles Domingo Dilmer went over the different sections and then answered questions.

Afterwards the maps for sections 1-5 were distributed in order of the team’s number and the room emptied more quickly than if someone had passed gas. There are nineteen teams in total that will be racing this edition and as they pored over the maps, several expressed concerns about the navigation with the French team Absolu Raid Vachettes saying, “The orienteering looks complicated! Get a picture of us now because we might get lost out there...”

The map scales are 1:20 and 1:30 and the terrain looks as tricky as promised.

The prologue for the expedition race of the Aventura X-perience Festival began exactly at 17:00 in the Sant Esteve church square of the town of Caldes de Malavella. It quickly became clear that the RD is strict on timing and rules. 14:00 was the deadline for teams to have completed registration and bag drop off and those that missed this time limit were attributed a 5 minute penalty before the race had even begun.

There was a note at the starting arch listing the penalty and eleven of the nineteen teams had the dubious honor of starting the race with a penalty. The French team number 17, VTT Labenne, also failed the rope skills test so will not be allowed to start section 8.

As the church bells chimed, the racers collected the prologue map and took off through the streets in a hard and fast battle to determine the order that the teams would begin racing at 22:00 tonight. There were four activities spread out in different directions exactly 2.5 km from the church square. Teams had no idea what the activity was until they arrived and then one team member had one chance to succeed at the given activity to validate a 15 minute bonus.

The activities were Catalan bowling, archery, setting an azimut and slack-lining. It has been unseasonably warm here, even late in the afternoon, and teams arrived at each activity red faced and out of breath.

The slack lining was probably the most impressive to observe as the designated team member had to instantly calm their heart rate, center themselves and concentrate intensely on their core stability. (This SleepMonsters reporter learned cuss words in several different languages today as few teams gained the 15 minute bonus on this activity but it was a lot of fun to watch!)

The Catalan Spain team Maresmextrem did not do the prologue as one of their members was still at work so they were attributed an hour penalty as well as being the last ones to start the race.

Teams are now relaxing in the town municipal sports hall where registration and gear checks took place, in anticipation of the race start. Several took advantage of the hot showers and it is clear that they are impatient to start the actual race.

The first section will be an overnight mountain biking section of 85km with a 2,400m positive elevation gain. Temperatures have dropped considerably and it will be a cold, clear night to race.

Let the fun and games begin!