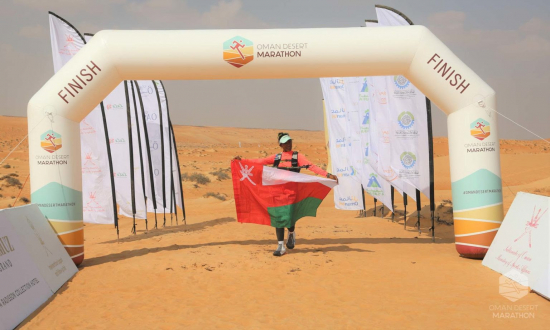 The fourth stage began very differently from yesterday, as it was a sunny and very humid morning. The sand was almost wet and very easy to approach as it had been more compact, which made it easier for runners to move forward with no extra effort. This stage is sort of preparation for tomorrow afternoon, where runners will run a 'marathon' and will have to take advantage of the light while they have it.

At 6:30 AM, runners started with the first kilometer, consisted of small dunes, a descend, and road-crossing, followed by 22 kilometers of small compact dunes. At the fifth kilometer there was the first checkpoint. The landscape had a lot of small vegetation, making the view a little greener.

Runners found this stage the hottest so far, very different from the uncommon cloudy day they had yesterday. However, the temperatures were not higher than 30 degrees celsius, but the level of humidity raised as this stage was closer to the sea. It was very critical for the runners to stay hydrated.

On the tenth kilometer, some runners had a longer rest, benefiting from the shade of the tent, and a couple of them already felt drained and had zero energy. It was at 8:40 AM when Lorenzo Doris wanted to quit and asked to be taken to the camp but he was encouraged by friends in a very emotional try to cheer him up while he recovered.

When there were only 8 kilometers left to go, runners checked on at the last checkpoint and Rob Ward, also known as the weatherman lost his thermometer so we could not have his daily report. Oliver Vriesendorp from the Nederlands went ahead as soon as he finished refilling his bottle and was followed by Dörte Schreinert from Germany who had a good speed today in spite of the weather.

Doctors went to check on runners that were struggling as they were concerned about their safety. Sadly, Lorenzo decided to withdraw from the race having covered 12 kilometers in total. Anna Baruzi from Italy had some serious blisters that slowed her down, too, so she had had to be taken out at the 14th kilometer, suffering from a bit of a heat stroke.

The first arrival at the finish line after running 28 kilometers was of Rachid Almurabity from Morocco, followed by his brother Mohammed and Evgeni Glyva from Ukraine in third.

In women's category, Aziza Raji was in the first place, with Emmanuelle Romanzi and Fabiana Pizzali following.

Oman Desert Marathon 2019 - Day 6
With the briefing taking place at the start line at 6:30 AM, runners were very tired and nervous. It was a long night before making it to

Oman Desert Marathon 2019 - Day 5
Yesterday runners spent almost all day resting, preparing for the longest stage of the race, 42.3 kilometers and 1450 meters of ascent with