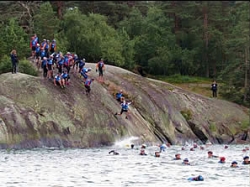 Over the past couple of months in the AR World Series teams have had the chance to race in 3 more uniquely different environments, and those with the heart and stamina to push for the podium have had the final opportunities to win their places in the World Championships in France in less than 2 weeks time.

Toughest Race in Finland
New to the ARWS calendar this year was Endurance Quest in Finland, put on by the Multisport.fi organisation lead by Petri Forsman, who was on the team which won the first AR World Championships in 2001 in Switzerland. Petri and his team were reviving an established race and put on the toughest, most challenging race ever held in Finland which attracted a very strong entry, particularly from Scandinavia and Eastern Europe.
The course was set in Western Nyland and the beautiful archipelago in the Gulf of Finland, offering teams the chance to explore an unspoilt region of National Park famed for its lakes and islands and the course would favour teams with strong watersports, paddling and navigational skills. (The disciplines included kayaking, canoeing, rowing, coasteering, sailing and swimming!) The terrain was complex, and those who followed the web tracking were amazed at the detail of the mapping.
In a race with many varied stages and challenges, which included ‘Finnfoam’ swimming, flying fox, climbing, kickbikes and inline skating, it was the Finnish teams who dominated, with Team Omjakon swapping the lead with Team Multisport.fi early on, and later pulling ahead for an impressive win.
“It was a solid race from us, our pace was moderate throughout, so nobody was towed, navigation was at a good level and we didn’t make any big mistakes. Also our sleeping tactic was quite successful ... that is not too much but not too little,” said Outi Seppä. He added, “The longest paddling stage went into Tammisaari National Park and through hundreds of small islands. It was very beautiful, on my opinion the most beautiful place I have ever paddled. It was our luck that we did this leg in daylight so we could see it all!”
The team of Heikki Hihnala, Outi Seppä, Pekka Teivaanmäki and Tommi Putkuri all have over 10 years of race experience from teams such as Thule Adventure, Adventure Team Finland, Team Multisport and more recently with Omjakon and they will go on to race the World Championships. Hihnala commented, “Our aim for this year was to win Endurance Quest and we did with our strengths which are water and solid navigation with good maps.”
However they know the French Alps may not suit them so well. “For Raid in France we expect a good race, but as we are a "flatland" team with specialities in water sports we know that the French mountains can be challenging for us. But with good teamwork and a positive attitude we hope that the result will be good.”