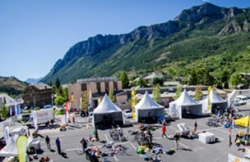 The 2012 Adventure Racing World Series came to close with Raid in France hosting the World Championship in the Provence-Alpes Côte d'Azur region of Southern France in late September. The race was the culmination of a season in which teams had raced to high altitude in Ecuador, through game reserves in South Africa, across the Cairngorm Plateau of the Scottish Highlands and through the High Sierras of California, and the start line in France included almost all of the qualifying teams from the series.

Yet the best adventure racing teams in the world could take nothing for granted as they knew the 65 strong start list also included many strong challengers, particularly from the host nation. The French teams were perhaps better prepared for the demands of the course presented to them, designed to live up to the race motif of 'Back to Nature'.
Those who had studied the pre-race information knew there would be an extreme amount of ascent and descent as the route passed through the Ecrin, Queyras and Mercantour National Parks, but the degree of technical challenge, the isolation and the unrelenting demands of the course were at a level few teams had ever encountered before. The weather also added to the challenge, with day after day of blazing sunshine, sweating and blistering the teams into submission.
The race began in the small town of L'Argentière-la Bressée in the Hautes-Alpes region with 21 nations represented, and ironically it was a forced change in the route due to recent snowstorms which set teams off on an uncomfortable footing. A planned high level glacier circuit was cut short for safety reasons and an alternate lower level trek put in, but teams had taken heavy boots for the glacier crossing and after day one many already had sore and blistered feet.
From the early stages the race favourites lead the way, among them Team Silva (Sweden), defending champions Thule Adventure (France/Sweden) and 3 times Raid in France winners Raid Quechua, but from early on they were all chasing Team Seagate from New Zealand. It was to stay that way throughout the race with the Kiwi team showing their skill, strength and endurance to stay well ahead of their rivals and become worthy World Champions.
Chris Forne, Nathan Fa'avae, Trevor Voyce and Sophie Hart pushed on with such unrelenting speed and determination that the race faced their own challenges to support a team which quickly arrived at checkpoints a day, and then 2 days, ahead of the majority of teams.
As the route crossed the southern and Maritime Alps on its way towards the finish on the Mediterranean coast at Roquebrune-Cap Martin teams trekked across high ridges, abseiled into deep canyons, clung to the side of via ferrata, paddled and rafted on white water and encountered some of the best mountain biking any of them had ever seen.
Gradually the pace, ascent, heat, dark zones, injury and fatigue took a toll and the number of full course teams was reduced to a hardy 15 who managed to cross the finish line on the coast. After reaching the beach on the outskirts of Monaco Seagate made the final paddle into the finish line in high spirits and celebrated their arrival with a comic capsize courtesy of Fa'avae before crossing the line for a champagne celebration. (What else in France?)