The Aces in the Expedition Adventure Racing Pack 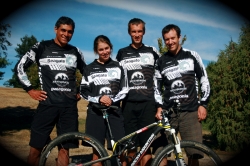 No matter how you shuffle the cards the hand with the most aces is going to win, and it’s the same with expedition adventure racing teams.

So far this year mixed teams of 4 from around the world have been challenged to compete in 3 races in the Adventure Racing World Series, taking in an incredible variety of terrain, weather and sporting challenges. Yet somehow it is the experienced and established teams who always win out and take the honours. No matter what challenges are thrown at them, their combination of teamwork, outdoor skills and stubborn endurance means they hold the competitive aces.

Race one this year was held at the Huairasinchi race in Ecuador in February and it was the defending champions and race favourites, Team Ecuador Explorer who quickly established a lead and extended it to the finish.  They won by a margin of more than 8 hours on a course which took them across the high altitude Pampas, skirted snow-capped volcanoes and then descended through tropical forests to the coast, dropping from 3400m to sea level on the 411km course.

Race two for 2013 was held in March in New Zealand with ‘Chapter 2’ of the Orion Health Godzone Adventure Race, and here the aces in the starting pack gathered in Queenstown were the world’s top two ranked teams, Thule Adventure and Team Seagate.  The Swedish based Thule team pulled out quite early in the race, a rare occurrence for a top team, and it was Seagate who lead from the start in the Southern Alps to finish back at Queenstown. Their navigational skills played a key part on a testing and remote course and they completed the 514km distance in just 75 hours 35 minutes.

Race three was also in March, and the venue this time was Argentinean Patagonia for the Tierra Viva race.  The region is known for its severe weather but sometimes the unpredictability of adventure racing brings pleasant surprises and teams were treated to clear skies, stunning views of the lakes and volcanic mountains and clear moonlit nights. More predictable was that the top ranked visiting teams from the UK and Spain were fighting it out at the front of the race.

The course at Tierra Viva is different to others in the AR World Series, offering teams several chances to visit a base camp area between stages, and allowing them to choose their own route to collect the checkpoints on several sections.  This tactical and navigational test did not phase either adidas TERREX Prunesco (UK) or Columbia Vidaraid (Spain), but it was the UK team which took an early lead and kept it to the finish.  Columbia Vidaraid are ranked above their British rivals (5th to 7th), but the adidas team are Patagonian experts, having won the Patagonian Expedition Race across the border in Chile 5 times in a row.

These early season results mean that all the teams qualifying so far this year for the AR World Championships in Costa Rica in December were among the pre-race favourites and were on the start line at last year’s World championships in the Southern Alps of France.  (Seagate were winners then, and adidas TERREX were World Champions in 2009 in Portugal.)

The 4th of the 8 qualifying races this year starts shortly, and takes teams to a new continent - to race in South Africa.  The host race this time is Expedition Africa which is being held in the Drakensburg mountains and surrounding National Parks, and for the start on May 6th, there is one of the strongest race line-ups of the year, making it harder to tag a race favourite this time out.

Among the starters are the 3rd placed team in the AR World Rankings, Team Haglofs Silva of Sweden, one of the most experienced and consistent squads in the world, the defending champions and home nation favourites, Merrell Adventure Addicts, and from the U.S.A. the 6th world ranked team, Tecnu Adventure Racing.   Another experienced and strong home nation team are Cyanosis, and in a very international field other highly ranked teams are Sweco (Sweden), Issy Aventure (France) and Powerbar Inov-8 (Switzerland), who are former winners of a World Series race.  Not surprisingly the Swiss team prefer mountainous courses, which they are sure to get as the Drakensberg are the highest mountain range in Southern Africa, rising to 3,482 metres.

There will be 31 teams with racers from 10 nations starting the race and full details and live coverage can be found at http://www.kineticgear.co.za/tabid/15885/Default.aspx

After Expedition Africa, the next significant date on the ARWS calendar is the end of May, when the recently launched AR World Series Rankings will have their first revision.  (This is done on a 4 to 6 month cycle.)

With results from the first 4 races of the year to be taken into account there will be some significant changes, but it is unlikely there will be any new teams in the top echelons of adventure racing.

Where changes do take place it is more often when racers shuffle from team to team.  There is a limited pool of experienced expedition racers available as it takes many years to build up the necessary skills and endurance, while the demands on racers in terms of their time and the cost of racing and training is significant – expedition racing at the top level is part lifestyle choice, and for some racers semi-professional.

The joker in the pack which can necessitate changes is most often injury.  A consistent team is often the most successful, as Seagate prove, and when they were World champions in 2011 Thule Adventure too had consistent team.  Changes can affect the all important team dynamic, and Thule Adventure’s withdrawal at Godzone came about after they recruited two Kiwi racers to make up the team.  Expedition Racing is the ultimate team sport as all 4 racers must stay together and finish together to complete the race, and do so under extreme physical and mental stress, sometimes emotional stress as well.

Merrell Adventure Addicts defence at Expedition Africa sees them adopting two new members to a very established team, as a result of injury to team captain Graham Bird, and Tatum Prins taking time out from racing after giving birth. As veterans of more than 10 World championships between them they will be hard to replace.

Team changes can work well of course and adidas TERREX Prunesco successfully called in U.S. racer Jari Kirkland when winning Tierra Viva.  The only team to challenge Seagate at Godzone were a new name, Harroways Oats, they were however made up of very experienced racers, and had ‘borrowed’ Aaron Prince from Haglofs Silva for the race.  If they can find the right racer to fit into that available team place they may yet be the next new team to challenge the established aces.

Through June and July there is breather from racing before the frantic second half of the season in August and September.  (The World Championships in Costa Rica is in December.)

Two important races return to the roster later in the year with Ecomotion Pro taking place in Brazil in August and Bimbache Xtreme in Spain during September. The two remaining qualifiers are XPD Australia and the Gold Rush Mother Lode in the U.S.A. and you can find the full listing at http://www.arworldseries.com/.

This is also the information hub for other activity within the growing AR World Series.  Recent news has included the announcement of Huairasinchi in Ecuador as the 2014 World Championships venue and the publication of the first ever Mandatory Equipment list for the series.

The World Series has always avoided constraining races with rules and regulations, as the character and philosophy of each expedition race is unique and a great part of the sport’s appeal, but this made life difficult for teams, who had to acquire different gear for each race.  The new list addressed the inconsistencies and extra costs teams encountered and it was widely welcomed.

To be sure to keep up-to-date with all developing AR World Series news visit the website where you can join the mailing list for news updates.