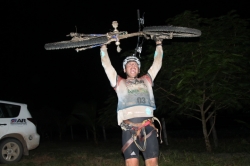 Following an emotional and exceptional Adventure Racing World Championships in Costa Rica the AR World Rankings have been revised, and the world's greatest endurance athletes are already looking ahead to 2014's expedition adventures.

There has been a change at the top of the AR World Rankings, with the new World Champions, Thule Adventure Team, regaining top spot and pushing last year's Champions, Seagate, down to second. This isn't a surprise as the World Championship race counts double points and Seagate failed to record a score after pulling out of the race in Costa Rica. It is perhaps more surprising that Seagate held onto second position, and they did so thanks to the 2 year ranking cycle and several wins in the World Series races.


Thule Adventure's top position is even more impressive as they have only recorded 3 scores, while those just below them have counted the maximum 4 available. This will make them much harder to knock off top spot, especially if they race well in any World Series races next year. They are in a strong position as the world's top Adventure Racing team.

The top 5 in the rankings still remain the same, with Team Silva Haglofs (Sweden) slipping from 2nd to 5th after failing to finish in Costa Rica and Columbia Vidaraid (Spain/Brazil) and Tecnu (USA) moving up into 3rd and 4th.


It is hard to break into that top 5 and adidas TERREX Prunesco (UK) have kept their 6th place in the rankings. They are another team with only 3 scores to count as their win in the adidas TERREX race in Scotland in 2012 was invalid due to using racers outside their team roster. (Had that win counted they would be 2nd in the rankings, just a few points behind Thule Adventure.) The team are disadvantaged as their racers work on the UK World Series event as course planners - in 2012 it was Nick Gracie, and for the 2014 race in Wales (now renamed ITERA), it will be the team navigator Tom Gibbs. The other male racer from the team in Costa Rica is Warren Bates, who is Race Director for Godzone in New Zealand. No team makes a greater contribution to World Series adventure racing.

The top 10 now has a very multinational look with teams from Spain, Sweden, New Zealand, USA, UK, France, Ecuador, South Africa. If you look at the team make up there are several Brazilian racers too, and there is a noticeable similarity between that country list and the venues for next years World Series races.

Lower down the rankings those teams who didn't race the World Champs or pulled out have fallen, while those who scored points by finishing in the top dozen teams have improved their rankings significantly. These include BMS and Quasar Lontra Kailash from Brazil, Bivouac Colts of New Zealand and Mountain Hardwear of the UK.

The full revised rankings can be found athttp://www.arworldseries.com/rankings.htm

Highs and Lows in Costa Rica

The 2013 AR World Championships in Costa Rica attracted a huge online and social media audience for its live coverage and race followers around the world were gripped by the unfolding drama as teams battled across the country, border to border and coast to coast.

Expedition Adventure Racing has so much more to it than any other kind of racing and all its aspects were explored in Costa Rica.


The location always plays its part and Costa Rica's beautiful, bio-diverse, protected and remote terrains challenged and enthralled teams in equal measure. They struggled through vast mangrove swamps and their treacherous tides, dense and noisy jungle, rafted down white water rivers with no habitation and crossed high mountains normally closed to all visitors and inhabited by the few remaining native tribes in the country.

At times they were dehydrated by the humidity and heat, but at high altitude teams struggled with the cold and some succumbed to hypothermia. Teams had many wildlife sightings, on the ocean and in the jungle, and fortunately no encounters with the more dangerous creatures in the country, particularly the crocodiles and snakes.

The people of Costa Rica made as much of an impression on the competitors as the landscape and on the finish line almost every team commented on the friendship and hospitality they had received along the way. There were many stories of being welcomed into homes, given a place to sleep and something to eat, one team were given a wooden paddle when they lost with kayak paddle, and at least two borrowed bikes to make it to the finish when their own were impossible to fix any more.

Most of the time teams were alone, relying on their own determination, endurance and teamwork to keep going. They experienced amazement at the places they found themselves in, despair and disappointment when things were going wrong and elation and satisfaction when they kept going and reached the finish line.

The best example of team work and resilience came from the winners Thule Adventure who were many hours in the lead and close to the finish when Jacky Boisset became unaware of his surroundings. He didn't know where he was, who he was with, and he wouldn't ride his bike! The team rested, then carried him, pushed him and pulled him, then rested some more and finally rode with him between two of them who were holding him up. Eventually they reached the last transition where the anxiety and stress on their faces expressed the emotional and physical turmoil they had been through to get to that point.

A few hours later, having completed the final rafting stage, on which Boisset could just float down the river, their faces showed joy, elation and relief as they crossed the finish line. Their determination and astonishing team work had taken them to a second world title - the first team ever to do this in the 11 year history of the AR World Championships.

For all the live coverage and all the team's stories seehttp://live.arcostarica.com/index.cfm .

Plans are already in place for this year's AR World Series, which will culminate in the 2014 World Championships in Ecuador in November.

There will be 7 qualifying races leading up to the 2014 final and they will take place on 4 continents. All are established AR World Series events, including two which have previously hosted the World Championships (Raid in France and Ecomotion/Pro in Brazil). The locations will include Kaikoura on South Island New Zealand, the French Alps and the High Sierra of California and the final will then be hosted by the Huairasinchi race in Ecuador from November 7-19th. This will be hosted in Quito, the highest capital city in the world, and the course will include the coast and the Amazon and will cross the high Andes and the Equator.

For more information on the AR World Series please seewww.arworldseries.com

For more details on the AR World Series see www.arworldseries.com