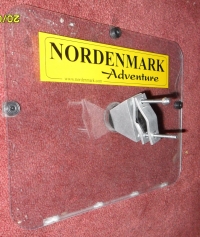 Pretty much the first thing on most peoples list as soon as they contemplate a map-based bike race is a map board.

Teeth and pockets will both admittedly hold a map, but reading a map in one hand while bouncing along a trail is not easy (or safe).  Just a few years ago the standard approach was a bit of hard board zip-tied to the handle bars and some bulldog clips to the hold the map.  If you were really flash you used a freezer bag to keep the rain off!

Its surprising then that today there are a glut boards on the market; at least 10 at the current count.

For something that at its most complex is a board and some mountings, the variety of designs is impressive.

Map boards split into two main types – rotatable or fixed.  Which one you want depends on how you read maps.  If you've got a gymnastic mind and prefer to hold your map still, then the standard piece of hardboard is perfectly good.  If you read maps by turning them then a rotatable board is essential kit.

Despite coming in plenty of shapes and sizes there really aren’t that many functional pieces of a map board.  The board itself is the most obvious part.  Other than choosing a size for the maps you'll use, the main variation is how the map is held in place; either a sheet of clear plastic to cover and hold the map, or a pair of bungees.  Both have advantages – the plastic keeps water out and holds the map flat, but puts another layer between you and map so making it slightly less clear (particularly if you use laminated maps).

How the board is attached to the bike is where the main differences lie between the various products.  Some use single clamps, some two, some have adjustment, various clamps are on offer, and some are detachable.  Actually all of the boards performed admirably in this regard and we didn't have any troubles, so clearly the actual design is fairly irrelevant.

The mountings come in various heights, which is largely a matter of personal choice.  Taller boards are closer to your eyes, but can be a lot more distracting as they obscure the ground immediately in front of the bike.  I personally prefer the taller options, but that's probably mostly due to my dodgy eyesight.

It’s worth considering how you might attach lights, bike computer or numbers as well as the map board to the bars, and in this respect a mounted map board wins out over the budget approach of card or board fixed with zip ties.