Investec-Songo-Specialized Out To Defend Their Title 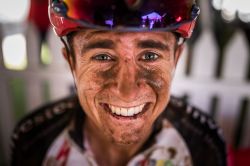 Jaroslav Kulhavý and Howard Grotts return, with Simon Andreassen and Christoph Sauser, to defend their Absa Cape Epic title for Investec-songo-Specialized in 2019.

The Czech Express, as Jaroslav Kulhavý is fondly known, is uniquely suited for the trials of the Absa Cape Epic. The need for a combination of power on the rolling transitional phases of the race, with explosive climbing and superb technical abilities seems tailored to the defending champion’s skill set. His partner, Howard Grotts, excels most meanwhile, later in the race and when the climbs become brutally steep. The 2019 Absa Cape Epic route then plays perfectly into the combined strengths of the defending champions.

Stages 1, 2, 3 and 5 of the race provide opportunities aplenty for Kulhavý to lay down a sustained barrage of watts. While Stages 4, 5, 6 and 7 all feature exceptionally steep climbs, ideal for Grotts’ lithe riding style. Unlike in 2018 though, when Kulhavý and Grotts won the Absa Cape Epic without a support team they will have Investec-songo-Specialized stable-mates for the 2019 race.

In Simon Andreassen they have one of the sport’s brightest young talents, who will be learning his trade as a stage racer with the sage Christoph Sauser alongside him. The pressure is largely off Andreassen, as the aim for the 21 year old is to glean wisdom from the twelve time finisher; who is two decades his senior. Andreassen and Sauser will be aided in their support role by the Specialized Foundation-Spur Schools League team of Alan Hatherly and Sam Gaze.

In four starts Kulhavý has three victories and one second place finish on his Absa Cape Epic palmarès. After sealing his third title in 2018 he alluded to the fact that he was eager to target the record of five which is mentor, Sauser, holds with Karl Platt. Records can only come with race victories however and the 2012 Olympic Gold Medallist is focused only upon performing in this year’s race. “The preparation is going well” Kulhavý started. He then elaborated: “Training for the Absa Cape Epic is very similar to my normal training; just with more of a focus on riding in the mountains. The 2019 route looks good. There is more elevation on every stage than last year. That can be good for us, especially for ‘lightweight’ Howie [Grotts]. I’m also looking forward to the many singletracks; they are going to be fun”.

Grotts meanwhile will be putting the experience he gleaned from winning the 2018 race to good use this time out. “Last year's Absa Cape Epic was a huge learning experience for me. I'd already had one Cape Epic under my belt at that point, but being at the front of the race added a whole other dimension to the race” Grotts confided. “Even though I felt prepared physically, dealing with mechanicals efficiently and staying calm under pressure were the most significant lessons I learnt, in the early part of the race. It was also incredibly helpful to have Jaro [Kulhavý] pace our efforts and decide where the best time was to try to gain time or save energy” the American concluded.

As defending champions much of the pre-race attention will be on the Investec-songo-Specialized team. With Kulhavý’s experience and Grotts’ growing confidence that weight will not rest too heavily on their shoulders. Especially as they once again have Sauser’s astute guidance to call upon from within the race, if need be.

The Numbers Behind The Untamed African MTB Race
The 2019 Absa Cape Epic was one for the record books. It featured more metres of climbing per kilometre than any previous edition. Off the