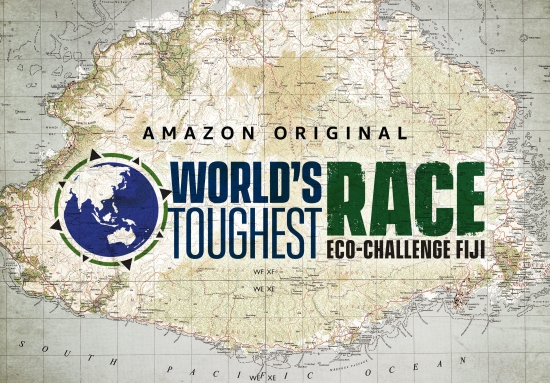 Amazon has announced the lineup of teams from 30 countries that will be competing on “World’s Toughest Race: Eco-Challenge Fiji,” the “Eco-Challenge” reboot from Mark Burnett and Bear Grylls.

Hosted by Grylls and executive produced by Burnett, Lisa Hennessy and Eric Van Wagenen, the “epic, gritty and unpredictable” race will take place in Fiji this fall and be captured for a 10-episode series to launch on Prime Video in 2020.

Among the teams racing are Team Khukuri Warriors, 28-year-old sisters from India who are racing for gender equality and are the first set of twins and South Asians to complete the Explorers Grand Slam (7 Summits, North & South Pole); a team of veteran racers who competed in all nine seasons of Eco-Challenge, now returning as grandparents; an American Eagle Scout team and a team of Scouts from Australia, a team of Wounded Warriors who served in the U.S. Armed Forces, the world’s youngest expedition racer to compete in the Adventure Racing World Series at the age of 17, who holds three world records; and a team of Ironman athletes including “The Iron Cowboy” who gained notoriety for completing 50 Ironmans in 50 states in 50 days.

The teams are racing to raise awareness to a variety of causes, including breast cancer, military veterans, equal pay, and Alzheimer’s disease.

Here’s the official description for the MGM Television produced series, per Amazon:

World’s Toughest Race: Eco-Challenge Fiji is the ultimate expedition race in which teams will race non-stop, 24 hours a day, across hundreds of miles of rugged backcountry terrain complete with mountains, jungles and oceans. Each race team is comprised of four competitors, including at least one member of the opposite sex, and one assistant crewmember that will be helping their team from base camp. Each team will race under a single country flag while making their way through some of the most impenetrable terrain Fiji has to offer.

The race will encompass a variety of non-motorized forms of transportation and other various challenges including outrigger paddling, mountain biking, rappelling, climbing, whitewater rafting, paddle boarding, and canyoneering, which teams must pass assessment tests in.

Navigation must be done with a map and compass only and teams will be required to use expedition problem-solving skills in their quest to the finish line. If any team member quits or is unable to complete the race, the entire team will be disqualified. Only teams that can work together under extreme stress and fatigue have any hope of reaching the finish.

“Challenging oneself in the outdoors is as relevant today as it was 25 years ago when Eco-Challenge began. It’s the ultimate test of human spirit, teamwork and honoring our planet,” Burnett said. “I can’t wait to see the drama unfold as these teams test themselves beyond what they ever thought possible.”

“The Fiji course is truly epic,” Grylls said. “It’s incredibly demanding and will force our competitors far out of their comfort zone as they race against themselves, their competitors and the fiercest elements of mother nature. Only the teams that work together can ever hope of making it to the finish line.”

“The backstories of the athletes are what will be truly inspiring,” said Van Wagenen “Not everyone will win – or even finish the race, but following them throughout this grueling competition and sharing their triumphs and setbacks along the way will make very compelling television.”

Amazon’s list of the teams currently confirmed to race is as follows;

Team Gippsland Adventure (Australia)
Team Gippsland Adventure is made up of experienced orienteers, runners and adventure racers. They have been friends for years, but this is the first time that they will all be racing together as one team.
Competitors: Rob Preston (TC), Kathryn Preston, Tim Boote, Aaron Prince, Patrick Howlett (TAC)
Team Hashtag: #TeamGippslandAdventure

Team Mad Mayrs (Australia)
This family team consists of two brothers, one cousin and an honorary family member who were born and bred in Australia and have shared a lifetime of adventures together from around the world.
Competitors: Tyson Mayr (TC), Elijah Mayr, Nick Mayr, Courtney Home, Chris Dixon (TAC)
Team Hashtag: #TeamMadMayrs

Team Thunderbolt AR is a group of donut loving, joke telling, trash talking friends (and twin sisters) who have raced with or against each other for many years fighting for the top step of the podium in the Australian adventure racing scene.
Competitors: Dave Schloss (TC), Bernadette Dornom, Elizabeth Dornom, Leo Theoharis, Jan Leverton (TAC)
Team Hashtag: #TeamThunderboltAR

Team To-Get-Ther (Belgium)
Team To-Get-Ther hails from Belgium and like to push themselves to the limit, whilst enjoying nature and each other no matter what.
Competitors: Ludo Kaethoven (TC), Debby Urkens, Katrien Aerts, Jurgen Frtizz De Grauwe, Roger Urkens (TAC)
Team Hashtag: #TeamTogether

Team Atenah Brasil (Brazil)
With a friendship spanning over 21 years, Team Atenah Brasil has traveled, lived and raced together in two Eco-Challenges, but unfortunately, one member fell ill and they had to exit the race. They are back in hopes to redeem themselves in Fiji.
Competitors: Shubi-Silvia Guimares (TC), Karina Bacha Lefevre, Nora Audre, Jose Caputo, Jose Pupo (TAC)
Team Hashtag: #TeamAtenahBrasil

Team Costa Rica (Costa Rica)
Team Costa Rica is made up of 5 friends who share a profound connection with nature and an innate desire for exploring. Racing Eco-Challenge has been a lifelong dream for all of them.
Competitors: Eduardo Baldioceda (TC), Sergio Sanchez, Gerhard Linner, Veronica Bravo, Eric Cano (TAC)
Team Hashtag: #TeamCostaRica

Team Czech (Czech Republic)
Team Czech is a team of adventure-addicted outdoor lovers who are happiest when they are racing through the unknown and undiscovered. They know their strong friendship will help them overcome any obstacles on the course and across the finish line.
Competitors: Jan Cisar (TC), Pavel Paloncy, Tereza Rudolfova, Jan Obuskevic, Libor Kriz (TAC)
TeamHashtag: #TeamCzech

Team Eco DXB competitors have a combined strong level of experience and skill set that is perfectly geared to compete on an extreme level.

Team Tabu Soro (Fiji)
Team Tabu Soro loosely translates to “Never Give Up” and this is what they must find within each other and as a team in order to cross the finish line while pushing themselves to their physical and mental limits.
Competitors: Uri Kurop (TC), Adam Wade, William Simpson, Anna Cowley, Semiti Tuitoga (TAC)
Team Hashtag: #TeamTabuSoro

Team Khukuri Warriors (India)
Team Khukuri Warriors is the first team from India to join Eco-Challenge. Led by twin girls, who by 23 years defied gender stereotypes in a largely rural, conservative India to reach the world’s highest and farthest points – Mt Everest, the North Pole and the South Pole. They will be joined by a mountain climbing, skiing and rafting expert, doctor and their father, who was a former Colonel in the Indian Army.
Competitors: Tashi Malik (TC), Nungshi Malik, Brandon Fisher, Praveen Singh Rangar, Col VS Malik (TAC)
Team Hashtag: #TeamKhukuriWarriors

Team Tiki Tour (New Zealand)
Team Tiki Tour is a group of Kiwi’s that take on ‘Tiki Tours’ in rugged alpine terrain and although the alps are vastly different to the terrain they will experience in the Fijian tropics, they are up for the challenge.
Competitors: Tom Lucas (TC), Micheal Kelly, Joanna Williams, George Lucas, Jeremy Warnock (TAC)
Team Hashtag: #TeamTikiTour

Team Summit (Spain)
Team Summit is made up of a group of people who have a broad experience in expedition races. This will be the first time Team Summit races together as a team in 10 years.
Competitors: Emma Roca (TC), Jukka Pinola, Fran Lopez Costoya, Albert Roca Velazquez, David Rovira Roqueta (TAC)
Team Hashtag: #TeamSummit

Team Cyanosis (South Africa)
Team Cyanosis is a team that has truly stood the test of time. Two of the members have been racing together for over 16 years and will be joined by two other very experienced and highly capable adventure racers.
Competitors: Clinton Mackintosh (TC), Nicholas Mulder, Sarah Fairmaid Clarke, Darren Barry, Steven Burnett (TAC)
Team Hashtag: #TeamCyanosis

Team Swedeforce (Sweden)
All connected by the Swedish Army, Team Swedeforce’s goal is to bring military tactics and strategies onto Eco-Challenge because they are racing for soldiers and officers that will be watching proudly as they compete under the Swedish flag.
Competitors: John Karlsson (TC) , Malin Hjalmarsson, Emil Dahlqvist, Oskar Svärd, Johan Lilja (TAC)
Team Hashtag: #TeamSwedeforce

Team UK Adventurers (United Kingdom)
Inspired by the first season of Eco-Challenge, Team UK Adventurers has lots of racing experience and wants to find out if Eco-Challenge is as tough as it gets and hopefully will inspire others to join the world of adventure racing.
Competitors: Kevin Stephens (TC), Joseph Selby, Nathalie Long, Tim Stephens, Gill Watson (TAC)
Team Hashtag: #TeamUKAdventurers

Team Uruguay Natural (Uruguay)
Uruguay Natural has been racing together for almost 21 years and has competed in 2 Eco-Challenges. The team is racing because in their opinion adventure racing is the best feeling a person can have, surrounded by wild nature and powerful rival teams.
Competitors: Ruben Mandure (TC), Fredrica Frontini, Gonzalo Smaldone, Thiago Bonini, Laura Moratorio (TAC)
Team Hashtag: #TeamUruguayNatural

Team Canyoneros (USA)
Team Canyoneros is made up of 4 passionate video game makers and an animal lover who, after racing for the last seven years, are still looked at as the underdogs everyone loves to root for.
Competitors: HIen Nguyen (TC), Greg Watson, Nathan Whitaker, Lena Mcknight, Steven Geer (TAC)
Team Hashtag: #TeamCanyoneros

Team Iron Cowboy means sacrifice, persistence, and resilience — a team forged by friendship with a thirst for fun and adventure. This team is grateful to be competing against the best in the world and you won’t be able to wipe the smile off their faces.
Competitors: Sonja Wieck (TC), James Lawrence, Shaun Christian, Aaron Hopkinson, Joe Morton (TAC)
Team Hashtag: #TeamIronCowboy

Team Regulators (USA)
Team Regulators, from Northern California, is comprised of members with diverse backgrounds and skill sets. Their respective communities have been through a lot in recent years including a fire that devastated their community. From fire to ice, they have endured it all, and will continue to do whatever is needed to rebuild and come back stronger than before.
Competitors: Steven Bell (TC), Joshua Watkins, Heather Gustafson, Crista Jorgensen, Jason Hull (TAC)
Team Hashtag: #TeamRegulators

Team Unbroken (USA)
Working their way through combat disabilities, wounds and internal struggles, Team Unbroken is a team of veterans and civilians who are racing to remind themselves, and others that you may be wounded, but you remain unbroken.
Competitors: Hal Riley (TC), Gretchen Evans, Dr. Anne Bailey, Keith Mitchell Knoop, Cale Yarborough (TAC)
Team Hashtag: #TeamUnbroken

Entries Are Open For Eco-Challenge – Fiji Islands
‘Entries are open for Eco-Challenge’.  That’s not a line anyone in adventure racing expected to read again, not