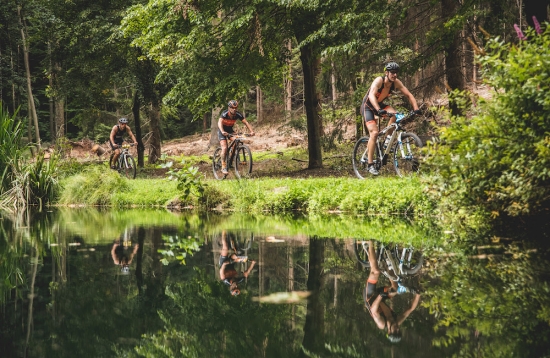 It's the fifth career XTERRA World Tour win for Serrieres, his third this year, and second in two weeks following his breakthrough victory at the XTERRA European Championship on August 3.  For Karaskova, a four-time XTERRA European Tour Champion, the victory was the 33rd of her storied career and third this season.

In the men's elite race super swimmer and hometown favorite Jens Roth was first out of the water followed by Maxim Chane and Lukas Kocar one-minute back.  Tiago Maia was in fourth, 20-seconds later, and another minute back was a group featuring Ben Allen, Doug Hall, Peter Lehmann, Max Sasserath, and our eventual winner, Serrieres.

Kocar pushed hard early on the bike to catch Roth and they rode together up front to the big challenging climb at the 13K mark.  At that point Chane was in third 1:10 behind, and a chase pack featuring Francois Carloni, Serrieres, Sasserath, and Malte Plappert were more than two minutes behind of the leaders.

During the second half of the mountain bike which featured the event's most technical downhill, Roth was riding spectacularly and put a 30-second gap on Kocar heading into the bike-to-run transition. Chane was still in third, but Xavier Dafflon and Serrieres were charging hard in the fourth and fifth positions.

Once on the run, it was all Serrieres.  He passed everyone in front of him in the first 5K and held on for a convincing win in 2:35:43, more than one-minute ahead of Roth in second. "It's so nice to win another big event in Europe," said Serrieres, who now has wins at XTERRA Greece, Czech, and Germany to go with three second-place finishes at XTERRA Italy-Garda, Belgium, and France.  "I know I am in a good shape, but I was feeling tired during the whole race. The water was cold for me and I took some time to recover on the bike. I was first with Carloni and stayed on his wheel, then Dafflon came and I stayed with him. I was not at my best on the run, but I was able to keep a pace strong enough to pass the others in front of me and then make a small gap to secure the win."

Roth was equally delighted with his second-place finish in front of friends, family, and countrymen and women. "It was an amazing race, for sure the best race of my career so far," said Roth.  "I made huge mistakes in my previous race in France, so I had a strategy and very clear plan for this one. I raced the race 100 times in my mind and knew exactly what I had to do. This performance and result in my country is amazing, I am really happy."

Kocar also had one of the best performances of his career to finish in third. "Maybe I was expecting more but I have to be happy with a third place here in Germany after my disappointing race in Czech," said Kocar.  "I pushed hard on the bike to be close with the leader, but he was faster on the downhill and I came to transition 30-seconds behind. I gave a lot on the bike and after the second loop of the run I was out of power and didn't have the legs to fight for a better position."

Boosted by a brilliant bike leg and strong run, Dafflon finished fourth followed by Chane in fifth. "I had a terrible swim, I was alone from the beginning and I lost a lot of time," explained Dafflon. "But on the bike, I felt really good and pushed a lot to close the gap and came to transition less than two minutes behind. On the first loop of the run my legs were empty but then I managed to run better, passed a guy in front and finished fourth. I am happy and proud for such a result and performance here in Germany."

In the women's elite race Nicole Walters and Jacqui Allen from the UK were first out of the water with Brigitta Poor 20-seconds behind in third followed by Penny Slater and Loanne Duvoisin together in fourth and fifth another 20-seconds back.

Duvoisin made her move early in the bike and was leading at the 13K mark, with Allen 30-seconds behind, then Walters, Slater, and Ladina Buss another minute+ behind.  Further back, Karaskova was passing one rider after another on her way to the front and by the time she reached the tricky downhill near T2, she was riding in second just 10-seconds behind Duvoisin.

The women's race came down to the run, and it wasn't until the second lap that Karaskova made her winning move and crossed the line in three hours, two minutes and 49 seconds, just 12-seconds ahead of Duvoisin in second. "It was a really hard race today," said Karaskova.  "I tried to focus only on myself and knew that I had to perform well on the bike to close the gap. In the beginning of the run I was happy to be in second, but then I saw I could take the win and it was amazing for me."

Duvoisin, who was the overall amateur XTERRA World Champion in 2017 before turning pro, came oh' so close to winning her first major as an elite. "I had a very good swim and a very good start on the bike passing all the other girls in-front of me but coming into transition I was not feeling great and knew that Helena was close behind," said Duvoisin.  "We both pushed a lot, but she was stronger today and took the lead and I didn't have the power to keep the pace, Still, I am very happy with second today, and race after race I feel more confident in myself."

Ladina Buss had one of her best performances of the season to finish third. "I was able to swim with the other girls in the first loop but then slowed down and kept my pace," said Buss.  "On the bike I felt strong and pushed hard. I worked well with Slater and passed Allen, but I was always thinking that I need to keep some energy for the run. I had behind me strong runners, so I continued pushing so I wouldn't get caught."

The young Italian Marta Menditto had a great day of her own to finish fourth, just ahead of Allen and Slater in fifth and sixth position, respectively.

With the win today Serrieres jumps into the top spot in the men's rankings while Karaskova extended her lead in the women's standings after 12 of 14 events. Elites count their top eight scores, including what they got at the European Championship race. Up next, the inaugural XTERRA Luxembourg off-road triathlon on September 1. Learn more about the European Tour at xterraplanet.com.