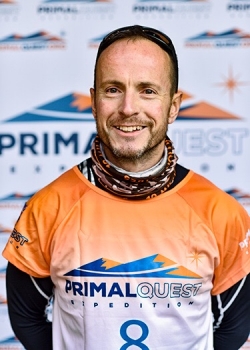 Alex Flynn was diagnosed with Parkinson’s disease in 2008 at the age of 36. Despite the initial set-back, his diagnosis became the catalyst in his life for showing people the possibility of creating positive change in the face of adversity.

In 2020, Alex will take on the 4 Deserts Grand Slam Plus – racing 1,250km / 780 miles unsupported on foot across some of the most inhospitable landscapes in the world in the Namib Desert, Gobi Desert, the Great Caucasus of Georgia, the Atacama Desert and Antarctica.

Only eight people in the world have ever completed the 4 Deserts Grand Slam Plus – Alex Flynn is set to join this unique group of super athletes while being the first person with Parkinson’s disease to ever to attempt any RacingThePlanet / 4 Deserts ultra.

Alex’s 2020 RacingThePlanet challenge will be chronicled in a docuseries from leading Hollywood Talent Management and Production Company Zero Gravity Management together with U.K. development fund Butch and Sundance Limited. The media team will follow selected 4 Deserts Grand Slam athletes as they prepare and race more than 1,000 kilometers on five continents to complete this grueling race series.

Endurance events are not new to Alex. He has completed marathons, ultra endurance races and triathlons, but nothing quite as challenging as racing 1,250km / 780 miles self-supported in such extreme climates and terrain. Alex’s endurance achievements so far include:

RacingThePlanet’s 4 Deserts Grand Slam Plus poses Alex’s biggest challenge so far. Not only will temperatures rise well above 40C in the oldest desert in the world and well below freezing in Antarctica, but Alex will also be crossing the world’s highest sand dunes, waist deep rivers, fighting sand storms, racing above 10,000 feet and being at the command of Mother Nature in Antarctica.

Alex has been featured on prime-time television, honored by the former UK Prime Minister, David Cameron, and met the Pope. Sir Ranulph Fiennes OBE said: “Rarely does one hear about such an inspirational and heroic Briton as Alex Flynn. The challenges he has successfully undertaken would be considered seriously hard by anyone’s standards and are independently worthy of recognition.”

However, Alex’s driver is to raise funds for and awareness of Parkinson's disease. He can be found doing some of the more complex, unexpected and surprising challenges across the planet to raise more than £1 million towards vital research to find a cure while inspiring and educating people along the way.

“I want a cure for millions around the planet and hope you do too. Together we can make change happen!” #KeepMoving

Alex Flynn is living proof that Parkinson’s disease is not an obstacle for success!