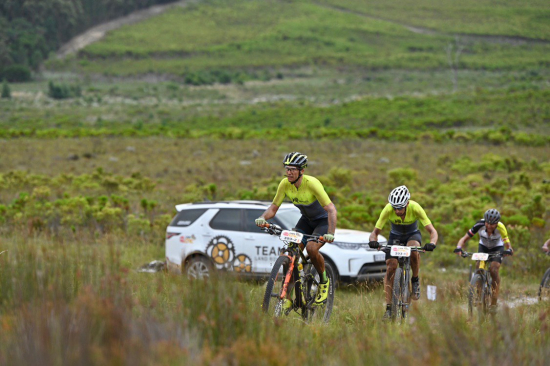 The 2020 Absa Cape Epic will be The Race That Measures All thanks to a rugged and Untamed route. Taking in 647 kilometres and 15 550 metres of climbing it will challenge and reward on the trails from Cape Town to Val de Vie.

From the 15th to the 22nd of March 2020 the Absa Cape Epic will provide 1 300 mountain bikers with their toughest mountain bike challenge of the year. Rugged mountain passes and rocky singletrack ascents though pristine fynbos await. As do sandy farm roads, between manicured orchards, and bone-rattling descents off ancient mountain ranges. This is the race that measures all on an untamed route, proudly brought to you by Land Rover, the Official Vehicle and Route Partner.

Longer than 2019 but with less metres of vertical ascent, the 2020 route uses the rocky African hinterland to provide the major challenges. It is a course for the nimble mountain goats rather than the pure power machines. Expect punctures and mechanicals to have their say in the final general classification standings, as any moment of fatigue or undue risk could be punished severely. At 647 kilometres in length, with 15 550 metres of climbing, the bare numbers hide the true story.

Starting on the slopes of Table Mountain National Park the 2020 Absa Cape Epic provides a familiar introduction to the event during the Prologue. Then it is transfer time, driving north to Ceres ahead of Stage 1. Returning for the first time in a decade to the Western Cape's deciduous fruit farming heartland and the famed Eselfontein trails. The opening marathon day sets the tone for the race, distance is rebuffed in favour of rugged technicality – it will be eight days in Land Rover heaven. Rocks, ruts, sand and off-camber corners fill the trails to Val de Vie.

The Queen Stage is early in the race, but Stage 2 is far from being head-and-shoulders more technical than the rest of the route. It explores the infamously tough Witzenberg Valley, a region where only the hard men and women of mountain biking thrive. Stage 3 continues the challenge, with a day back-loaded with climbing; including the race's toughest ascent inside the final 20 kilometres of the day. The second moving stage, from Tulbagh to Wellington takes riders into a forgotten valley, into the Zuurvlakte.

Once in Wellington the trails become steeper and slightly smoother. The Wild Boar routes, which wind their way through the forested and fynbos covered slopes of the Groenberg and Hawequa mountains, provide much of the trills and many of the challenges too. Stage 5 is the steepest of the race, featuring 35 metres of elevation gain per kilometre, while Stage 6 is the penultimate and second longest of the race.

The Grand Finale takes riders from Wellington to Val de Vie for a fittingly glamourous finish to the World's Premier Mountain Bike Stage Race. Reaching the last finish line is not easy however. The Trail to Val de Vie's 66 hard kilometres provide a fittingly rugged end to the 2020 Absa Cape Epic and ensure that every finisher earns his or her place in the Book of Legend.

The Numbers Behind The Untamed African MTB Race
The 2019 Absa Cape Epic was one for the record books. It featured more metres of climbing per kilometre than any previous edition. Off the

Investec-Songo-Specialized Out To Defend Their Title
Jaroslav Kulhavý and Howard Grotts return, with Simon Andreassen and Christoph Sauser, to defend their Absa Cape Epic title for