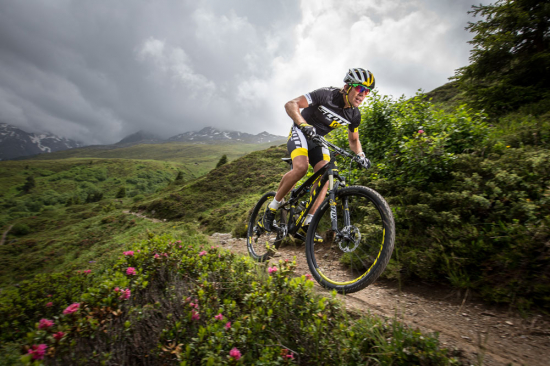 The 2019 Swiss Epic delivered exciting racing in the UCI Men's and Women's fields while a total of 574 registered amateur riders attempted the five-day mountain biking stage race in the Graubünden region of Switzerland. Now, sights are set for 2020 event featuring a highlight-packed route of Laax – Arosa – Davos with general registration opening today, 9 September 2019.

It was a memorable and action-packed week in the Swiss Alps as the 2019 Swiss Epic unfolded in a fierce battle of willpower for the UCI Men's and Women's fields with mechanicals, illnesses, crashes, and exhaustion affecting performances and strategies.  Meanwhile, a total of 574 amateur riders making up 287 teams from 41 countries started their journey to the finish line, sharing the same exquisite but challenging trails with the professional riders.
Kicking off in a wet and cold Davos on Tuesday 20 August, riders were in for a muddy first stage from Davos to St. Moritz negotiating 3,000 meters of cumulative climbing over the 86km opening stage.  It was team Trek Selle San Marco and team Shimano S-Phyre that claimed the stage victories in the UCI Men and UCI Women's categories respectively.

Heading into Stage 2, all eyes were on the race leaders with expectations high that they would retain their lead and pull another stage victory out the bag.  A 65km circular course around St. Moritz, Stage 2 was comparatively short but steep featuring panoramic views as the weather slowly started clearing to reveal the true beauty of the surroundings.  In sharp end of the racing field, the Trek Selle San Marco team of Michele Casagrande and Fabian Rabensteiner kept their lead firm, while the UCI Women's category saw new stage winners in the form of KS TREK - Sportograf's Adelheid Morath and Bettina Janas.

Stage 3 brought another transition as the race made its way from St. Moritz to Lenzerheide for the 80km Queen's Stage. The technical trails and varying terrain including a section of the Lenzerheide Word Championships XCO course favoured the cross-country riders with team jb BRUNEX / Fischer BMC claiming the men's stage win, while KS TREK - Sportograf held firm in the women's field.  The penultimate stage of 48km around Lenzerheide during Stage 4 saw the return of the Trek Selle San Marco team across the line first while team KS TREK - Sportograf extended their lead in the women's race with their third consecutive stage victory.

The Grand Finale between Lenzerheide and Davos concluded the week's racing in spectacular fashion as team Trek Selle San Marco A wrapped up the overall title while Devonbosch Stellenbosch took the stage honours in the UCI Men's division.  In the UCI Women's division it was a dominant performance in the end by KS TREK - Sportograf with four stage wins and the overall title to add to their names.

A total of 253 amateur teams completed the 2019 Swiss Epic, along with a total of 28 individual riders whose partners were unable to complete the event.  A remarkable feat of riding as well as organisation, the 2019 Swiss Epic saw riders complete over 11,900 meters of cumulative climbing as 200 crew and 800 local volunteers from 14 local communities ensured a smooth race experience throughout.

The focus now shifts to 2020 as the Swiss Epic continues the tradition of changing its route year after year, bringing riders a brand-new experience in the scenic Graubünden region next year.  Enjoying the same warm and welcoming hospitality of the region, riders can look forward to a five-day stage race, from 18 to 22 August 2020. The journey will start in Laax where riders will spend two days traversing the trails before heading to the well-known Arosa village.  An Alpine resort village in the Schanfigg Valley, Arosa is known for its beautiful lakes, mountain slopes and trails.  After two days in Arosa, riders will transition to Davos, host of the sold out 2019 Swiss Epic start and finish, for pure mountain biking fun with breathtaking climbs and panoramic views.

The 2020 Swiss Epic will once again offer riders a full-service mountain biking experience with five nights in luxury Swiss hotels, breakfast and dinner in the race village accommodation, bike wash and servicing after each stage and door-to-door transport of the official Swiss Epic rider bags between their hotels. In addition, riders stand the exclusive chance to win one of 15 sought-after qualifying slots to the Absa Cape Epic stage race in South Africa.