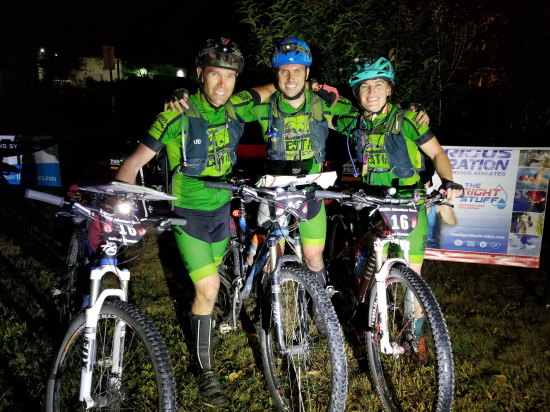 Brent Molsberry, Scarlett Graham and Dusty Caseria of Quest led from the gun and cleared the course – estimated at around 140 miles in length, with more than 16,000 feet of elevation gain – in 21:15:00. Rootstock, based in Philadelphia, Pennsylvania, finished second in 23:33:00.

“It was a very physically demanding course, and our strategy was to go hard from the start. Hills are definitely something we have an ample amount of right outside our door in Bellingham, so we were excited about the idea of a hillier course and figured that would help us compared to the competition,” Molsberry said. “In the latter stages of the race, we were falling apart a little bit due to some cramping issues, but we were able to work through it and hold it together.”

Winning the national championship was the culmination of lots of hard work and a collective dream for Quest, which is comprised of Molsberry and his wife, Annie, Caseria and his wife, Emily, and Graham and her partner, Mitch Harter, as well as former Dart/Nuun racer Matt Hayes.

“It has something we’ve been talking about for a while – that it would be awesome to be able to bring that dream and bring that idea to fruition,” Molsberry said. “We’ve been competing at the USARA championships since 2014. Last year, we finished fourth, but all three of us felt like didn’t have our best race, that we could have gone faster. We were excited to see that results of us all having a great race this year.”

“We knew going in that Quest had a level of power and speed that we wouldn’t be able to fully match,” he said. “It became apparent that we would probably need them to have a significant mechanical or physical problem for us to be able catch them. We did what we could to keep it close, but they ran a clean race and held it together to avoid having a significant issue.”

This year’s course had fewer route options and was straightforward navigationally – traits that did not suit Rootstock’s style of racing, Freedland said.

“We are a finesse team that relies on navigation and strategy. Quest is excellent at all aspects of adventure racing, but without this core element of the sport, we felt our chances to beat them decreased significantly when we saw the race would really be more about speed and power,” he said. “We held close with them for the first third to half of the race, but these early segments didn’t have as much climbing. Once we hit the latter legs, they were able to hammer in a way which we simply couldn’t. Coming from the Pacific Northwest and knowing that those guys train in the mountains a lot, we felt they had an edge on every other team, and they took advantage of it in the second half of the race.”

Third place overall went to Rib Mountain Racing, based in Wausau, Wisconsin. The team also finished the season ranked first in the country, after accumulating points for top finishes in 10 races in the USARA 2019 race series.

“I am super-proud of Rib Mountain Racing. Over the past four national championships, they have been progressively been moving up, finishing in 17th, ninth, seventh and now third. It has just been fun to watch them move up the ranks,” USARA President Troy Farrar said.

Farrar said he was also proud of the growth of the all-female division, where 361 Adventures/Chickpoints took home the national title, followed by defending champion Fragile Flowers. Funding specially dedicated to paying part of the race entry fee for all-female teams has encouraged more women to enter and advance in the sport, Farrar said.

“All-women’s teams are growing in numbers, and it’s fantastic to see all of them do so well. We had five of them this year and we hope to continue building on that total in future years,” Farrar said.

In the co-ed master’s division, GOALS Adventure Racing Association won its first national championship. And Michigan Racing Addicts defended its title in the open division. Full results can be found at:  http://www.usaranationals.com/results.aspx.

Of Quest’s victory, Farrar said he was thrilled to see “the team that came from the farthest away” win the race.

“For them to come and win the championship is great,” he said. “They are huge boosters of the sport, and they’re putting on great races and bringing more people into the sport from the Pacific Northwest.”

Molsberry, of Quest, attributed the win to strong team dynamics, which have been propelling the team to new highs on both the national and international stages in recent years. Quest finished 10th at GODZone in New Zealand 2017, scored a podium finish at the 2018 Primal Quest, finished third at Expedition Oregon last year and returned to win the race this year.

“It’s a strong team – a very solid team with a lot of different skillsets. It’s very cool to know we can pretty much put anybody from our team out there and we feel like we can compete,” Molsberry said. “We’re fortunate to be able to live close together and we spend a lot of time together. We’re really comfortable with each other and can be really honest with each other. We know our own idiosynchracies and what each individual needs to keep moving efficiently through a race.”

Molsberry said the team is planning to defend its title at next year’s USARA National Championship, scheduled to take place September 11, 2020, in Cable, Wisconsin.  He said he’s excited to see the national championship move further west and hopes one day it can take place in Washington.

“Hopefully, this win will help shift some of the focus of the sport this direction,” he said.