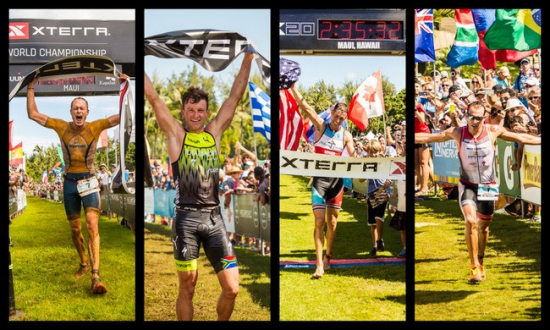 Those are your race favorites, and while it’ll be tough to stop any of them, many will try, starting with Sam Osborne from New Zealand, who was in that top five last year.  He finished third just behind Rom and Brad and ahead of Ruben and Josiah.  This year the Kiwi posted six wins and took home the Pan Am Championship.

The intrigue comes from across the pond, where the “two Arthurs” from France took the XTERRA European Tour by storm.  Arthur Forissier won the ITU Cross Tri World Title in April, then XTERRA Garda, Switzerland, and the big one at XTERRA France.  But just when he looked poised to run the table Arthur Serrieres stole the spotlight with wins at the XTERRA European Championship in the Czech Republic, then XTERRA Germany two weeks later. His run speed is outrageous, and he won the Euro Tour title.

There are others who have had breakout seasons, like Canada’s Karsten Madsen who had a strong second half and looks to be firing on all cylinders, Maxim Chane has shown signs of brilliance and seems destined for gold, and Brice Daubord who took home the XTERRA Asia-Pacific Tour title.

It’s an all-star cast, and anyone who breaks into the top 10 outside this group would have had themselves a day to remember.

In the women’s elite race four-time winner Flora Duffy from Bermuda strives for five, but reigning and 3x Champ Lesley Paterson has plans of her own.

The "Scottish Rocket" outran the women's field by four-minutes last month at the XTERRA Pan Am Championship and has been chewing on nails ever since.

Those two will be up against Europe’s best with Morgane Riou from France who won four races including the European Championship, Helena Karaskova from the Czech Republic who won her fifth Euro Tour title, the young gun Loanne Duvoisin from Switzerland who won the overall amateur title just a few years back, and Carina Wasle from Austria who won the Asia-Pacific Tour this year.

And the contenders list just rolls from there with Jacqui Allen from the UK and Penny Slater from Australia who had big wins, the XTERRA Pan Am Tour Champ Samantha Kingsford and the speedy Lizzie Orchard from New Zealand who are real threats, and American aces Suzie Snyder and Julie Baker who are always in the mix.