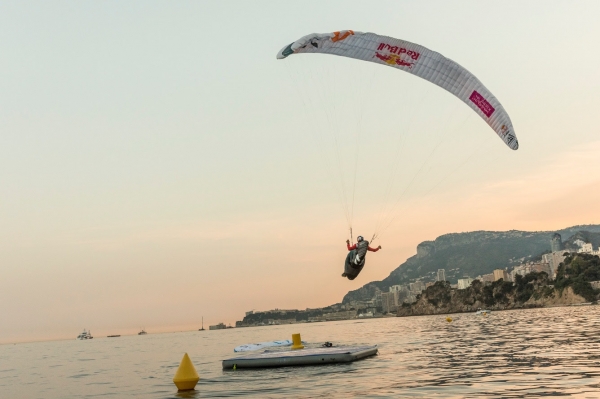 They came from 20 countries to do battle across the skies and mountains of the Alps. Almost two weeks ago some of the world’s toughest, fittest and strongest adventure athletes – all expert paraglider pilots – from the ages of 24 to 59 assembled in Salzburg for world’s toughest adventure race, the Red Bull X-Alps.

It is a race from the historic city to the Mediterranean sea, via 13 Turnpoints in Austria, Germany, Italy, Switzerland and France.

Today, as the clock stopped at midday, ten of those athletes had made Monaco. Five were eliminated and only one retired due to injury.

“It’s been an incredible race and most likely the toughest and most challenging one in Red Bull X-Alps history,” said race co-founder Ulrich Grill. “The performance of the athletes has been phenomenal and stronger than ever before.”

For the sixth time in a row, the race was won by ‘Chrigel the Eagle’, the incredible Swiss paraglider and adventurer Christian Maurer in a time of 9d 3h 6m. Second place went to French rookie Maxime Pinot, whose brave performance saw him refuse to give up the battle against Maurer throughout the race. He crossed the line in 9d 21h 52m.

Third place was shaping up to be an epic duel between Austrian athlete Paul Guschlbauer and the French firefighter Benoit Outters. But in the spirit of the race, they joined forces on the last day and crossed the line together to take joint third place in time 10d 8h 45m.

Grill added: “I co-founded this race with Hannes Arch back in 2003 and you cannot believe how much the performance of athletes has improved. Ten years ago you would have expected a third of the field to pull out with injury or foot problems. These athletes are not just stronger, better prepared but also incredible mountain athletes and runners, not just paraglider pilots. Maurer’s performance once again has been amazing, but he is not the only great athlete out there. We are seeing new young talented adventurers come through who promise to be great stars of the future.”

This year’s race was particularly challenging for the 30 men and two women who started. The course entailed several crossings of the main chain of the Alps and the weather conspired to make it even more tough. A fast start in the air was soon replaced by bad weather in Switzerland, forcing athletes to hike to many of the Turnpoints, including the highest, Titlis, which was at 3,000m. For some athletes, this required an ascent of six hours.

On some days athletes were hiking up to 5,000m of vertical meters, equivalent to the height of Mt Everest every second day.

Race director Christoph Weber said: “Once again it’s been an amazing adventure for athletes and I pay tribute to their endurance, fitness and mental strength. This has not been an easy course or an easy year with tricky weather and lots of snow in the Alps.”

High snowfall in the Alps meant athletes had to use mountaineering equipment in much of the mountains. They also experienced extremes of weather from rain, snowfall and towards the end, a heatwave in France.

“No matter where they finished up, they and their teams all deserve credit for achieving what they did, and safely,” added Weber.

Aaron Durogati (ITA1), who reached the final Turnpoint of Peille at 5am today in 9th place after hiking through the night, summed up the feeling among athletes: “It was a beautiful race and a great adventure – the best Red Bull X-Alps from the fun side of things and the flying. But the last hours were tough.”

Simon Oberrauner (AUT2) added: “There were so many experiences I could write 10 books about it.” He added that it was the camaraderie between competitors that made the race unique and special. “Of course we’re all competitive but there’s a spirit between everyone.”

The last athlete to make goal was Tom de Dorlodot (BEL) who has competed in every edition of the race since 2007. But this was the most special ending – as it was the first time he made goal. Wiping away the tears of joy and exhaustion, he said: “Reaching Monaco has been my dream for 14 years. It’s a special moment. It’s a good feeling to be here.”

Four athletes have already completed the symbolic last flight of the race to a landing float in the sea. The remaining athletes who reached Peille before midday today will be able to fly down to the beach after 6pm this evening, where their race will end. It is the flight every athlete has been looking forward to.

The race finishers were:

Chrigel 'The Eagle' Achieves Record Sixth Victory
Chrigel Maurer, 36, was today on track to win a sixth consecutive victory at the Red Bull X-Alps after reaching the final Turnpoint of

Maurer Closes In On Record Sixth Victory
Chrigel Maurer is today on track to win a sixth consecutive victory at the Red Bull X-Alps as he approaches the final Turnpoint of Peille.

Monaco Is Coming Closer And Closer
Can Maurer be caught by his chasers? For three days they've hiked thousands of kilometers and pushed through pain barriers they

Battle At The Back
Furious fight at the rear of the pack as Colombian and Korean teams battle to avoid elimination. Day seven of the Red Bull X-Alps 2019

The Longest Day
The suffering kicks in as athletes find themselves hiking through the longest day of the year. Today it's midsummer and the 30

The Fight Goes On
Bad weather brings the battles to ground level.   The fog has rolled in across the Swiss Alps this morning, forcing athletes to

French Send A Strong Message To Race Champion Maurer In The Prologue
The Austrian mountain resort of Wagrain-Kleinarl today played host to the first stage of the epic trans-alpine adventure race, the Red Bull

One Week To Go Until Red Bull X-Alps 2019 With Advanced 3d Live ...
This weekend, 32 athletes from 20 nations will arrive at the basecamp in Wagrain - Kleinarl, Austria for final preparations for Red Bull